The Americans called them "Tories" or "Traitors". The British referred to them as "Loyalists". They were the men and women who remained loyal to the British Crown during the American Revolution (Revolutionary War) They may have been individuals living in the Colonies (now USA) who fled to Canada and fought on the British side. They may have been British soldiers. You have just found out that you have one in your family tree. How do you find more about your Loyalist ancestor?

Petitions can hold a wealth of genealogical information (military service, description of hardships, immigration year, letters from friends attesting to petitioner's loyalty, origin of petitioner, etc) OR they can contain very little. Only by finding every petition for every family member will you be happy that you have not overlooked a clue. For example one family member might give info that another does not. 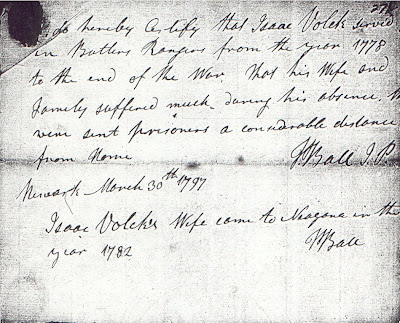 The affidavit on the left is part of a large bundle of letters, affidavits, and petitions from my Loyalist ancestor Isaac Vollick which he submitted in 1797. Each bundle is given a number, in this case "27". Then each page in that specific bundle is assigned a letter. The affidavit is 27K indicating that A, B, C, D, E, F, G, H, I and J preceeded it. You can see that this set of papers for Isaac probably contains a great deal of interesting information.

This specific piece of his petition in 1797 states

You can see that I have learned a great deal from this one piece of paper among many - that Isaac was in Butler's Rangers from 1778 on. That his family were imprisoned and then exiled. That his wife (and probably children) arrived in Niagara in 1782. There was much more information in this set of papers and I will talk about that in other blog posts. One letter went into great detail of Isaac's family's hardships. Today I just want to demonstrate how important the UCLP are in your research.

Step One is to consult the UCLP Index (Upper Canada Land Petition Index) for all instances of your family. Copy each entry in the index exactly as found. Then use the Finding Aid for the UCLP Index to convert the info for each entry to a correct microfilm number for the full petition(s) for land.

The UCLP index is available on InterLibrary Loan but you will have to ask your local library or FHC for details (or consult the online FHC catalogue).
at October 07, 2008

The OGS has the UCLP Index available on CD. A handy and worthwhile resource. I agree with you Lorine, that UCLPs are the first place to start when researching Loyalist ancestors.
Kathryn

Greetings Lorine,
I made an error in my earlier comment. It is the Land Books Index that is on CD through OGS. Sorry about the confusion.
Kathryn