Putting Flesh on the Genealogy Bones

It's always interesting to find out more details about an ancestor. I don't want just a name and birth and death dates for my great grandmother or any other ancestor. I want to know about that ancestor, find out how my great-grandmother felt about a war, learn what great grandpa did for a living. Even better is finding a court case or a long obituary or write ups in newspapers about an ancestor. Photographs or letters are a wonderful treasure!

My great grandmother Mary Elizabeth Peer (nee Vollick) has long been a mystery to me. My grandmother McGinnis (Mary's daughter) never spoke of her parents. I knew they both died in Guelph Ontario but that was all. I knew Grandma's father (my great grandfather) died when she was a young girl and the oldest of several children.

I did not know anything else until my Uncle wrote a series of letters in the 1960s which came into my possession in 1980. He knew Mary's full name and who she married.

He thought Mary was born in Elmvale Ontario, which turned out not to be correct but gave me a starting point for my search. It turns out that Mary's parents moved to Elmvale in the 1880s and in fact most of Mary's siblings died near or in the Elmvale area of Simcoe County, as did her parents.

My uncle had heard whispers as a young boy that Mary's parents disowned her when she eloped with my great grandfather Stephen Peer. And so my search began. Using standard genealogy research methods, I looked for Stephen and Mary in the census records.

I was saddened to find her in the 1901 Guelph census as a 40 year old widow with 9 children ages 4 to 20. My grandmother was the oldest and I had never known she had so many brothers and sisters!

Continuing through the census years I was able to find Mary Elizabeth with her husband Stephen Peer. Next I found her marriage record in 1879 showing both Stephen's and her parents.

This allowed me to carry on researching backwards but I still was not satisfied. I wanted to know details of her life! Then I found Stephen's death registration and his obituary. According to the death record he had died in 1897 at age 45 of typhoid fever. His obituary was quite sad for two reasons - he was listed under the wrong name! His obit is found in the Milton Champion but he is listed as Levi Peer which was his father's name.

The circumstances of his death and the condition of his surviving family (including my grandmother) was tragic. The family was left with no money and could not even afford a burial for Stephen. An excerpt from the paper:

..... leaves a wife and nine children in destitute circumstances. Capt. Clark, City relief officer has made every arrangement for the proper burial of the remains at the expense of the city, and also attended to the immediate wants of the family. Mayor Hower collected a considerable amount from the citizens and handed it to Capt. Clalke to be used in the interests of the family. The authorities at Trinity Baptist church are also assisting in their relief.


This may explain why I have never found a burial location or tombstone for Stephen. So at the age of 34 my great-grandmother was left a poor widow with 9 children ages 1 to 11 years old. I have often wondered if she had to take the children to the poorhouse which is now the Wellington County Museum.

But Mary Elizabeth's tragic story does not end there. She died in 1914 of starvation with her youngest son Philip Edgar Peer at her side. He was 17 years old and he was the informant for her death registration (which is incorrect, he presumably being so confused and grief stricken that when asked for his mother's parents' names, he gave his own parents names)

Edgar, as he was called, was now an orphan. He joined the Canadian Expeditionary Force one year later and rose to the rank of Sargeant before being wounded at Passchendale. After recuperating he was sent back to the front and was killed in 1918, just a few weeks short of his 22nd birthday.

I always found this a tragic story. My grandmother never spoke of it. Perhaps the memories were too painful. I would still like to know more about her mother Mary Elizabeth. I now know when she was born. I know who her parents were. I know when and who she married and when she died. I know the names of all her children. But I have no photos of her nor of my great grandfather. 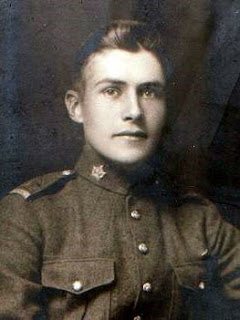 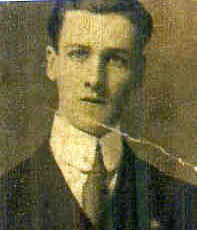 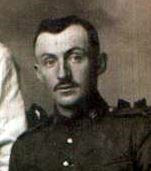 I have photos of three of my grandmother's brothers, shared by other descendants with whom I made contact. (from left Philip Edgar, Leonard, George)

I have beautiful photos of all of Mary Elizabeth's siblings, also shared with me by a descendant of one of her sisters. Their family lore was that my great grandmother was the black sheep of the family who horrified everyone when she ran off with my great grandfather. Their family remembers her as being called "Lizzie" by her sisters and that the family lost all contact with her after her marriage in 1879.

Great grandmother Mary Elizabeth Peer nee Vollick had 9 children. Surely someone descended from them has photos or knows more about Mary ELizabeth as a person! But to this day I've not been successful finding them. So if anyone is descended from the PEER family of Guelph Ontario I hope they find me or I find them one day.
at January 18, 2009

What a tragic story. Like you, I have to keep digging until I have some flesh to put on the genealogy bones. Their stories help focus how we view our own lives and those of our ancestors. I'll bet some more PEERs find you one of these days.

What a sad story! I sincerely hope that you connect with other descendants and find evidence that she had at least a little joy in her life.