Finding a Removal Order for an English Ancestor

In an earlier post I talked about How to Use the National Archives United Kingdom Website to Obtain Ancestor Documents. One of the items I found, and ordered, was the Removal Order seen below: 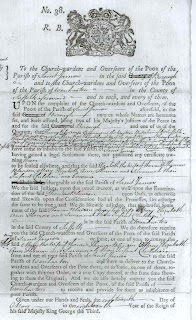 I wasn't sure why a Removal Order would be issued and what the circumstances were surrounding one. So I did some research and found out that inn 1662 England an Act of Settlement was passed to define which parish had responsibility for a poor person. A child's birthplace was its place of settlement, unless its mother had a settlement certificate from somewhere else stating that the unborn child was included on the certificate. From the age of 7 the child could have been apprenticed and gained a settlement for himself or he could have obtained settlement for himself by service by the time he was 16.

After 1697, the poor were allowed to enter any parish in search of work, as long as they had a Settlement Certificate signed by the church wardens and overseers of their place of settlement and two magistrates guaranteeing to receive them back should they become chargeable. No one was allowed to move from town to town without the appropriate documentation.

If a person entered a parish in which he did not have official settlement, and if it seemed likely he might become chargeable to the new parish, then an examination would be made by the justices or parish overseers. From this examination on oath, the justices would determine if that person had the means to sustain himself and, if not, which was that person's parish of settlement. As a result of the examination the intruder would then either be allowed to stay, or would be removed by means of what was known as a Removal Order.

Removal Orders would often take a person or a family back to a place of settlement miles across the country, sometimes to a parish they had only known briefly as a small child. It was not uncommon for a husband and wife to have their children taken from them, each being removed to separate scattered parishes.

Apparently a Settlement Certificate would have far more genealogical information but I wanted to see that Removal Order so I sent off for a copy. The documents I ordered just arrived this week (pretty quick service!) and I'm pleased that the Removal Order gave the ages of each of Thomas & Mary's children.

I also ordered two Bastardy orders and one Bastardy Examination for my ancestors, and will talk about those and the genealogical information in them in another post.

The Removal Order is a form document with blanks to fill in, which indicates to me that there must have been a lot of them served! What a wonderful item to find. If you have English ancestors, why not have a look online? You might be surprised at what is there.
at April 28, 2009

i was just wondering what a removal order was!!! so thank you...