Recently I posted about my grandmother's missing ashes. Grandma died in Owen Sound in 1985 and was supposed to be interred with my grandfather in Guelph, and a marker attached to his tombstone. But there was no marker and the Cemetery has no record of a burial anywhere in their cemetery for her. 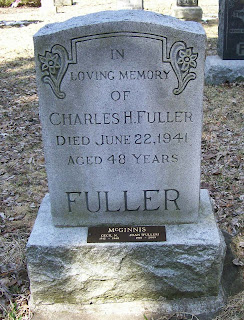 My parents were to be interred in the same plot. Their marker was completed and added last week. So earlier in the week I took my mother and father's ashes to Guelph for their interment. I decided that on my return home I would start phoning funeral homes in Owen Sound and look for an obituary for Grandma (thanks to readers for helpful suggestions on how to find my grandmother!)

Much to our surprise, when the plot was opened for my parents' ashes, the gravedigger found an unexpected urn. A label read "Ruth Bates" - my grandmother! But the urn was not buried at the depth the Cemetery requires and their conclusion is that someone (my uncle no doubt) surreptiously interred Grandma without notifying the cemetery. That would explain the lack of a marker, which my auntie (Grandma's daughter) swore she and her husband ordered. It seems my uncle did some digging on his own, then fibbed to my aunt about the marker.

The cemetery assured me they would not remove Grandma's urn with ashes, nor would they bill me for her interment. They have added her name to their records and suggested I have either a bronze marker added to the reverse of the tombstone, or have her name and years of birth and death carved on the front below my grandfather's.

Apparently interring a loved one without going through the cemetery is becoming more prevalent! As a genealogist I don't like this - it leaves no record for future generations, and there is no marker to note that this person ever lived. I have to be honest and say that I also think it's unethical to try to bypass paying the cemetery their fee for interment. But in this case, I'm glad that Uncle didn't just toss Grandma out the car window rather than pay the fee! At least we know where she is and my siblings and I can have her name added to the stone.

Now my mother, her parents and my father are all interred together and can finally rest in peace.
at April 26, 2009

Very interesting! Thank you for the update. I'm glad your grandmother was *found*.

A great follow-up to this story - I am so happy for you and your family!

A very interesting story. I am sure this is happening more often than earlier. It is curious to me though that people want these remains in a cemetery while many are "spread the ashes" on a mountain or their favorite fishing hole.

Everyone has their own preference as to what they want done with their ashes. For those who don't have a preference, it's the ones left behind who get to choose. Again, everyone is different. Some like the symbolism of scattering the ashes to the wind. Some like to be able to visit the deceased so they want an actual spot (grave) with the ashes there. It's a personal choice, there is no right or wrong

Wow, this was a stunning conclusion to the mystery. Makes you wonder how often this happens....

I am so happy to read your update. That's awesome!

Such a marvelous conclusion! Congrats on finding your grandmother!

If you hadn't been burying your parents' ashes.... If there hadn't been a name on your grandma's urn.... I'm glad you had a happy ending.