Yesterday my hubby and I went to visit my 87 year old aunt. She's the last of three sisters (one was my mother) and lives about 1 1/2 hours from me. She told me she had a few old photos of family so I packed up my Flip-Pal Mobile Scanner

. This would be the first time I'd put it through it's paces as a mobile tool but I've used it before and loved it (You can read my past raves of this scanner) 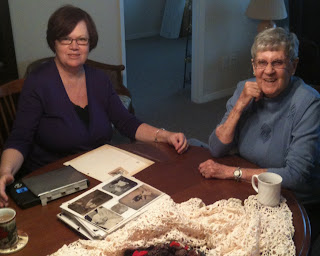 After lunch out and a visit, Auntie got out the photos - two HUGE tubs full! She had photo albums (probably 2 dozen or more), loose pages from albums, loose photos... I can't even begin to guess how many, but the tubs were overflowing. I forgot to get a photo of the tubs but will do that next time!

We cleared a spot on the table, Auntie even pushed her Christmas decorations to one side! 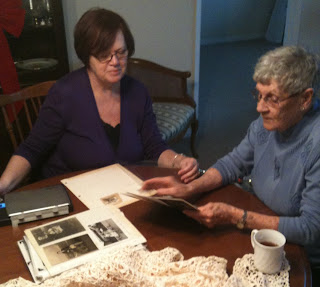 We had a great visit. My aunt told me who was in many of the photos, and she shared stories of the people. Since she remembers her grandparents very well and of course I never knew them, it was great fun to hear.


I scanned for 3 hours before my batteries died and my grand total of photos scanned was 73. Not bad! 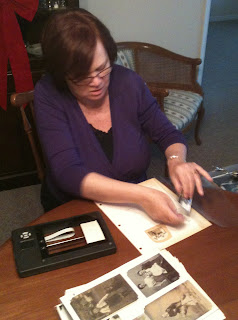 Many photos were taped onto paper. Many were in those horrid magnetic photo albums (shudder). I had to decide what I could safely and fairly easily remove and what had to stay glued or taped down.

made my life easy because I simply popped off the cover and flipped the scanner over to scan any that I could not remove. 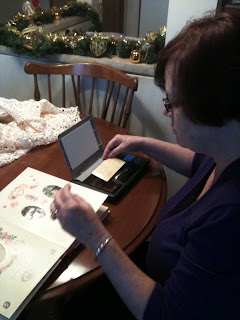 If I could remove them I did, and placed them on the scanner bed. It was easy to do and went very smoothly.

All in all I was very impressed and pleased with the results when I transferred the scans to my computer. I tried stitching for large photos (great results!) and will talk about that in a later post.

It was so wonderful to see these photos. Many I'd never seen before and I learned so much from my aunt, including the fact that my grandmother (her mother) had been in some kind of Dance Group as a pre-teen in England.


There were three photos taken in different years, of Grandma in costume with the other girls! On the back of one, in Grandma's hand, was written "Miss Mulligan's Girls Ellington School" So now I know that Grandma attended Ellington School which is in Ramsgate England! I never knew that before and now I'm on a quest to find photos of the school. Grandma was born in 1894 so she likely was a student there from 1900 on.

FAB!! Did you record the stories somehow, with my leaky brain cells that much data would not stick. FUN FUN FUN!!!

I'm a Flip-Pal fan as well. I truly believe this little device is going to revolutionize genealogy - just by making it available to use as you have described here.

Thank you for your experience with Flip-Pal. Hope Santa is nice to me.

I have to return to visit a cousin with Flip-Pal and a digital recorder AND extra batteries, now that I have read this most recent experience with the Flip-Pal.

What a wonderful day you had! I'm happy for you....it's a dream come true!

Glad your visit went so well. Thanks for sharing how you use Flip Pal. That's exactly the reason I want one. It's my Christmas present to myself!

This sounds a great bit of kit. I wonder if it available in the UK?

I'm dying to get my hands on one, but the Windows only stitching software is really slowing me down. Fingers crossed they do a Mac version soon.

The FlipPal is on my wishlist. I'm planning a trip to see my great grandmother and it would be great if I had it with me when I went. She has tons of pictures, documents, saved letters etc that I would love to have copies of for my family history research

How exciting! The Flip Pal is on my Christmas list too. :)

Are you aware of issues with ordering the Flip Pal in CANADA?? I have it (and only IT) on my Christmas list and my husband just informed me they will NOT ship to Ontario, Canada.

Heather, I live in Ontario Canada and I ordered it from the online website. it was shipped no problem! Methinks maybe hubby wants to surprise you.... by telling you he can't get it! Oops did I ruin the surprise? :-)

Thanks so much for sharing the Flip-Pal demo. I've been looking for something like that for years--like many other genealogists. Amazon has them in stock! Mine arriving in time for 90 yr old aunt's birthday on Friday.