My husband and I were trying to figure out what to give his elderly grandmother for Christmas. It occurred to us that she might love seeing the old family photos. So hubby scanned them and we transferred them to a digital photo frame

If you haven't seen those, check them out. You can get one that takes your camera memory stick or one that allows you to transfer photos using a flash drive

There are even some that allow you to upload photos to a website, then the frame automatically dials in nightly using a phone line to download new photos that you have put there.

We chose the simpler and less pricey frame, simply because it has fewer buttons and gadgets. We didn't want Gramma to be confused by any technology. With this one we leave our camera memory stick in, and the frame rotates through the photos. We'll be able to switch out memory sticks by sending a new one which can be switched for the first one. Then the first one can be sent back to us for new photos. That way she will have new photos every so often.

It's also a great way to preserve your family photos from the 1800s or early 1900s if you have any. We're even thinking about scanning some of the documents we have found in our research and adding those to the photo display.
at November 29, 2007 1 comment: 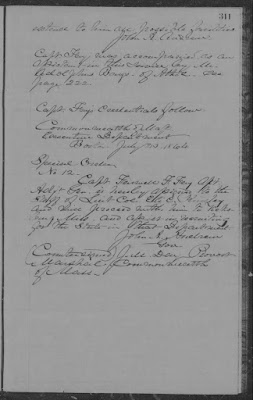 An 1862 law allowed honorably discharged Army veterans of any war to petition for naturalization, without having filed a declaration of intent, after only 1 year of residence in the United States.

Variations of this special treatment continued throughout the years.

It was designed to encourage enlistment during the Civil War. Aliens serving in the US military did not gain citizenship through service alone.

If the naturalization took place in a Federal court, naturalization indexes, declarations of intent, and petitions will usually be in the NARA regional facility serving the State in which the Federal court is located. Some of these indexes and records have been microfilmed.

Naturalization records from county courts may be at the county court, in a county or State archives, or at a regional archives serving several counties within a State.

What Genealogy Records Does Footnote Have?

After my announcement yesterday about the special 20% off discount for visitors who go to Footnote.com from OliveTreeGenealogy.com, readers wrote with questions. I goofed in assuming that readers would know exactly what Footnote has!


Another thing I really like about Footnote.com is their Spotlights section. Spotlights are an easy way for visitors to highlight interesting images that you find on Footnote and share them with other people. I see that subscribers to Footnote are starting to Spotlight their own ancestors' records that they find. That's an intriguing way to use the Spotlight feature.

You can also add a Story Page where you become and author, and tell the rest of us something about a topic you find interesting. Free Masonry, Naturalization, Immigration Records, you name it, you can create a Story Page for it.

Most of you know how much I like the website Footnote.com. It has NARA records that no one else has, plus much much more.

OliveTreeGenealogy.com has been given the okay to offer its visitors Footnote memberships for 20% off for a limited time! I've got links up for this special deal so if you are interested,now's the time to jump in and search for ancestors.

This offer is exclusive to Olive Tree Genealogy and one other site only. You can enjoy what Footnote has to offer by clicking on the banner for the special price at Genealogy Specials
at November 02, 2007 No comments: