*Added Certificate of Naturalization Elizabeth Koval, from Czechoslovakia, in Pennsylvania 1945

Take Me to Scotland!

Was Great-Grandpa Scottish? Travel to the ancestral home, walk in the footsteps of the clans. In 2009, there will be a Gathering of the Clans, and a year-long celebration of Scottish history. Homecoming Scotland will mark the 250th birth anniversary of Scotland's greatest poet, Robert Burns.

For this once in a lifetime anniversary, experienced genealogists will verify and document your Scottish origins. Those whose Scottish ancestors are in the US or Canada can trace their family back to their ancestral origins in the Old Country (Scotland).

The Port of Philadelphia Pennsylvania Baggage Lists were maintained by officials from 1800 to 1820. These Baggage Lists help fill in gaps for pre-1820 ships passenger lists. They are lists of passengers and their luggage on board ships.

Some Philadelphia Baggage Lists can be found online at OTE, a sister site of Olive Tree Genealogy

The online lists include images of the actual manifest and a transcription of the names of the passengers on board. Remember that if your ancestor had no luggage, his or her name will not be found on these lists.
at August 24, 2007 No comments:

Bneath the worn cement floors of and old warehouse lies what archeologists believe are the first permanent buildings of the settlement that became Montreal.

Archealogists have found the remains of Fort Ville-Marie, the lost, original French settlement in Montreal.

The fort was built in 1642 and housed as many as 50 early colonists, including Montreal's founder, Paul de Chomedey de Maisonneuve, and nurse Jeanne Mance. It would have been a key meeting place for aboriginal allies as well as the colony's administrative heart.

But the exact location of the fort, which was eventually abandoned, has baffled historians since the 19th century. The most recent record of the fort dates from 1683.

"The Palatinate or German PFALZ, was, in German history, the land of the Count Palatine, a title held by a leading secular prince of the Holy Roman Empire. Geographically, the Palatinate was divided between two small territorial clusters: the Rhenish, or Lower Palatinate, and the Upper Palatinate.

While the land of the Palatinate was good for its inhabitants, many of whom were farmers, vineyard operators etc., its location was unfortunately subject to invasion by the armies of Britain, France, and Germany. Mother Nature also played a role in what happened, for the winter of 1708 was particularly severe and many of the vineyards perished. So, as well as the devastating effects of war, the Palatines were subjected to the winter of 1708-09, the harshest in 100 years.

The scene was set for a mass migration. At the invitation of Queen Anne in the spring of 1709, about 7 000 harassed Palatines sailed down the Rhine to Rotterdam. From there, about 3000 were dispatched to America, either directly or via England, under the auspices of William Penn. The remaining 4 000 were sent via England to Ireland to strengthen the protestant interest....."

[The full article has been published, with my permission as Irish Palatine Story on the Internet in Irish Palatine Association Journal, No. 7 December 1996]
at August 20, 2007 No comments:

Sometimes it's hard to see the trees for the forest...

Ancestry.com is a subscription based membership site with tons of genealogy databases. But what a lot of genealogists don't realize is that Ancestry has almost 300 FREE databases - yes - entirely FREE, no strings attached to search.

This seems to be a well kept genealogy secret!

I'm not talking about their Free Trials or Free Access. I'm talking about genealogy databases that only require you to register with your name and email address in order to search them.

Footnote.com Special for all of August

More news from Olive Tree Genealogy! After talking to Footnote.com they agreed to extend the special discount offer on memberships for the rest of August.

I hope you find some ancestors! I have been very lucky and am quite excited about the finds I've made on Footnote. They have NARA records, Naturalization records, Revolutionary War records and much much more.

Feel free to tell others about this Special Price for all of August through the Olive Tree Genealogy Special link
at August 18, 2007 No comments: 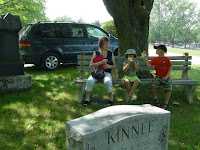 Last summer when my two eldest grandchildren came for their annual week long visit, I set up a Genealogy Game for them.

I was desperate for something to do with them and suddenly thought I'd take them on a hunt through a local cemetery for the grave of my great-grandmother's brother. I figured they'd be fascinated by the hunt for half an hour tops but it would help fill the time!

I gave each of them (8 year old and 6 year old) a large piece of paper with the last name of the ancestor we were hunting for (VOLLICK). I gave them a brief outline of the family relationship.

We talked about respecting the graves and gravestones of those buried in the cemetery and "manners" one should use in a cemetery. Then we set out.

The only other rule I gave them was that they must be able to see ME at all times. I didn't make the mistake of saying that I had to be able to see THEM, because of course that can be argued! ("Gee grandma I THOUGHT you could see me even if I went further down the path.....")

We walked together for awhile then they went off on their own. They loved this game. Two hours later they were still walking around the stones, reading every single one out loud and running back to ask me questions. They were fascinated by the ages of some of those who were buried there, particularly the children.

This gave us so many opportunities for learning - math skills in figuring out ages from birth and death dates, reading, history lessons when war graves were spotted and talking about young children dying more frequently in the 1800s than now, respect for ancestors and our dead, etc.

We ended up having a picnic on a park bench in the cemetery, then more hunting (yes we were successful!) and then off we went home, having spent an entire afternoon in the Cemetery.

The next day they asked me if we could go on another hunt! All in all a very successful Genealogy "game".

One of the questions they asked was why some of the gravestones were partially hidden by overgrown grass, and very dirty - so next summer I'll give each of them a tiny soft brush to brush off any dirt and leaves they find.
at August 17, 2007 No comments:

Some immigrants applied for passports to return home to visit family or friends. These records usually give a place of birth or at least the destination (which is often the home town)

The first passport issued in USA was dated July 1796. However until 1914 American citizens did not require a passport to travel abroad. You can read more about Passport applications at NaturalizationRecords.com website

Links to all the above passport records are found at Passports

There are also links to individual passports:

Help for Beginners - A Genealogy Guide

Olive Tree Genealogy has added a new section for those new to Genealogy! See Genealogy Guide - Help for Beginners

The Scottish Emigration Database currently contains the records of over 21,000 passengers who embarked at Glasgow and Greenock for non-European ports between 1 January and 30 April 1923, and at other Scottish ports between 1890 and 1960.

Medical Records in Ontario are held in various places - some are at the Ontario Archives, others are with the original institution.

To obtain these records, you should begin with the OA. Find out what they have, and then how to request it. For example,Queen Street Hospital in Toronto has records that go back to 1839. There are nineteenth century records for institutions in London, Hamilton, and Kingston and from Penetanguishene from 1904.

Files less than 100 years old are restricted under the Freedom of Information and Protection of Privacy Act. Requests for access must be submitted in writing to the
Access Unit of the Archives of Ontario.

Files created in whole or in part on or after 6 April 1954 are restricted under the Mental Health Act. Requests for access to records in Archives' custody must be submitted in writing to the Administrator of the appropriate psychiatric hospital.

Olive Tree Genealogy has a partial list of the OA psychiatric files and holdings
at August 10, 2007 No comments:

Footnote.com website and I have been talking about offering genealogists a special discount for memberships. I'm happy to announce that from today through til August 14th you can get $10.00 off a year's membership by using a special link on OliveTreeGenealogy.com websites.

Footnote is digitizing NARA records and they have a lot of great data online. There is much more to Footnote than just NARA records, so if you haven't visited, you really should.
The first time I explored their website I found an ancestor's brother in the NARA naturalization records so I was pretty thrilled.

You can start your journey at OliveTreeGenealogy.com or click on the banner below.

This promotion will run from midnight mountain time August 8 thru 11:59 pm Mountain time on August 14
at August 08, 2007 No comments:

FOOTNOTE.COM ANNOUNCES NEW PARTNERSHIP WITH THE LARGEST PUBLIC GENEALOGY LIBRARY IN THE U.S.

Footnote.com announced a new partnership with Allen County Public Library (ACPL), the largest public genealogy library in the United States. This partnership will result in millions of historical records being digitized and made available online for the first time at Footnote.com. The Allen County Public Library collections feature unique American and International records including family histories, city directories, military records and historical newspapers.

All Allen County Public Library records digitized by Footnote.com will be made available at the library for free. For those that cannot travel to the library, they can access these records from the comfort of their own personal computers with a Footnote.com Membership.