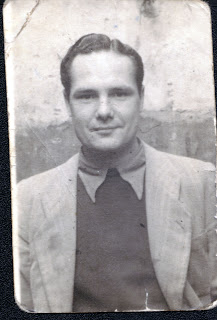 Case #13 Henry aka Harry Taylor  a WW2 British Soldier hidden from German Army in Italy who later settled in California, has been solved.

Thanks to our team of volunteers and in particular Samuel J. whose search of the U.K. Electoral Rolls provided the correct names of Harry and his wife (Susan, not Gloria). The address on the photo sent by Nick confirmed that we have the right couple.

Next came searches of many different records including Births and Marriages on Free BMD where a search found the marriage of Harry C. Taylor and Susan R. Willmott in December 1938.

Harry was found on a separate crossing one month later, going from Canada to Salt Lake City Utah. It was noted that he arrived in Canada by plane in 1947.

Naturalization records were also found dated July 1958 for the family who were living in W. Covina California.

One item of great interest was found on the National Archives for UK  A search of their online database provided a reference to Harry's experiences as a POW in Italy during WW2. For a small fee Nick was able to download the file and learn about his grandparents' part in helping Harry hide during one of his many escapes. It was fascinating reading as Harry escaped more than once and was re-captured each time.

There were many other records found but they contain information about living individuals (their dates and locations of birth, Susan's parents and siblings etc) so I won't share that here on Olive Tree Genealogy blog.

Suffice it to say that a phone number and address for one of the children of Harry and Susan Taylor was given to Nick, and contact has been made. Harry is deceased but his wife is still alive.

All in all another happy ending thanks to my wonderful readers to a very challenging case!
at June 15, 2012

Great work for a task that initially looked impossible...