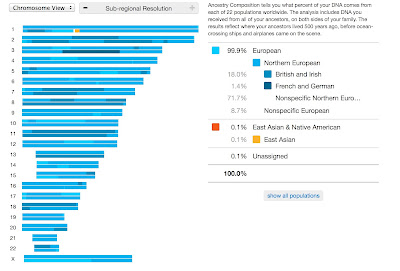 Ancestry results came in last week. I was fascinated by the sub-regional breakdown of my lineage. The chart above shows that I have 18% British and Irish, 1.4% French and German, 71.7% non-specific Northern European, 8.7% non-specific European, .1% East Asian and the rest unspecified.

What surprised me was no Native American showing for me (it is confirmed that I have Native American heritage through a Mohawk ancestor, Ots-Toch born ca 1622 in what is now New York state), and that I have a small bit of East Asian.  However it's important to note that one test isn't the final answer, especially when searching for confirmation of heritage from several generations back.

So it doesn't concern me at all that my Native American heritage doesn't show in the  23andMe.com

And the icing on the cake is that my brother's DNA test from  23andMe.com

also showed our Native American heritage at .7% (with East Asian at .1% just as mine is) 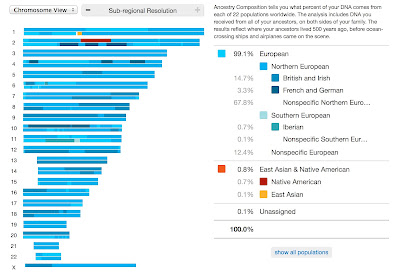 My brother's test from 23andMe also showed .7% Iberian which is the region of Spain and surrounding areas. We know from his raw data that he has a rare mutation which is known to have occurred when a group of Basque men went up to help build Hadrian's Wall between Scotland and England.  So that fits with the finding of Iberian heritage.

I still have a lot of reading to do to fully understand my DNA results (and my brother's) but it is an exciting and interesting adventure!

You must have been hit by recombination. However, that East Asian is probably related to Native American.

Northern European ate the ancestors of the northern native American tribes. The best way I can explain it is to tell you to look at the north pole as being the equator. Then you will see how close Russia and Finland are to Canada and Maine.
My great grandparents are upper Ural, and Kara Sea people's.

Ots toch An Cornelius AR my 8th great grandparents and the natives American didn't show in mine either. But as told down the generations to me ots touch grandmother was married to the chief her mother remarried a Mohawk Indian and when to his lodge and her mom and the chief took the girls an raised them. jacque left an didn't return he ended up marrying another women an had another family he never had anything to do with my grandmother or her sister.

Thank you clearing up some questions i had on my blood type.Ots Toch was my 6th great grandmother. Most of my other ancestry were Dutch German, Scottish irish and England. I did not understand how I have the Basque B minus blood type until now.