Going through the newly rescued photo album for Lost Faces was my fun time over the weekend.

It's a challenge for me to go slow, document each page before I start the process of removing the pictures from their pages.

If you are wondering why I'm being so fussy it is because any identification written at the time the photos were put into the album is bound to be more accurate than identification entered many years later. 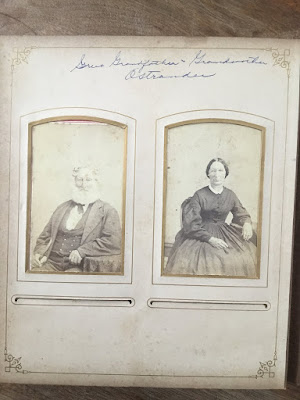 These photos appear to be Civil War era (early to mid 1860s).  I know that one of their great-great grandchildren wrote in this album. I am theorizing that this great-great grandchild was probably born around the turn of the century and may have written in the album as an adult, say around 1930 to 1960. I'll know more when I remove the photos, check the backs, and start my research on everyone who is identified in this album.

Removing the photos is a slow and careful project. You don't want to tear the album pages or bend the photos. Often they are stuck in the slots which is not surprising after being in there over 150 years! I use a very thin, pliable plastic ruler to help ease the photos out if I can't just slide them gently with my hands.

I can hardly wait to get at that stage of the process!

Please see Part 1 and Part 2 for the start of this process of how I rescue, archive, and publish on Lost Faces antique photo albums I save from disappearing.