Displaying Family Heirlooms - Making Sure the Handwriting is on the Wall

My husband's great grandmother's younger brother Bill Sandercock was killed in August 1917 during WW1, while standing beside his brother Cecil. Cecil sent a postcard to his parents about Bill's death. Bill was only 20. Sadly, one year later in August 1918 Cecil Sandercock was also killed in France. He too was just 20 years old. Two months before his death, Cecil sent a postcard to his sister (my husband's ancestor).

Their sister Myrtle kept all the postcards Cecil sent, as well as his military medals and Death Plaque. She also had photographs of her brothers and her father (who also enlisted in WW1) in their military uniforms. All of these family treasures were passed on in the family - first to my husband's grandfather, then his father and then my husband. I'm sure some items went missing, for no one knows where Bill's medals or Death plaque are. So we decided we needed to organize all the heirlooms and display them as a group.

This would prevent any more from being lost in future years, and would ensure that future generations know what items belong to what individual - and the meaning behind each one. 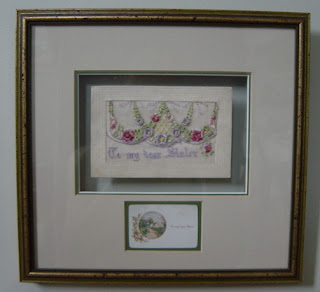 After laying out each item, we realized we had too many for one display. So we decided to keep the postcard separate from the rest. The postcard also had an extra small decorated card that went with it so we had two paper items to frame. The original postcard was beautifully decorated on the front with raised ornamentation of embroidered cloth.

The main colours in the embroidery were purple, green and pink with a bit of yellow. Embroidered in purple was the phrase "To my dear Sister" The embroidered flowers were surrounded by a beige frame with embossed lines. 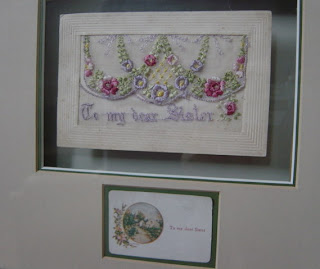 We chose a beige mat and gold frame with black flecks. Then we chose a forest green mat to use as a double mat, which gives a very nice effect of three colours - beige, green and white - when it is bevel cut and placed around the objects. We wanted to show off the feminine beautifully decorated postcard but also bring in some more neutral colours that would also enhance the postcard. Thus the gold flecked with black for the frame and the choice of forest green for the second mat.

But Cecil's hand-written note was on the back. Here was a dilemma - how to frame a postcard when we want to see both front and back? 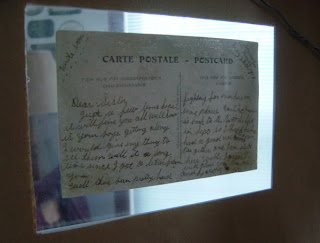 The solution was actually simple - we used clear glass instead of the usual cardstock mat. Thus the beige frame surrounds both the postcard and the small decorative paper that came with it. For the postacrd, the double mat of forest green was placed under the beige and clear glass under that. For the small decorative paper, the forest green mat is not cut away but is placed under the entire piece. 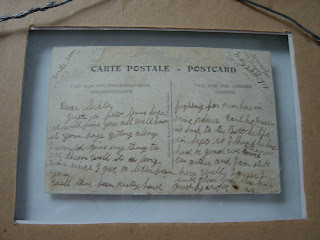 The result is very effective, we can turn the frame over and read the postcard at any time and whatever wall we hang it on shows through the clear glass mat. And Myrtle's favourite brother will always be remembered.

That's a really great idea! What a wonderful way to display an heirloom!

This is beautifully done. What a treasure to have these special bits of your family's history.

Thanks for sharing your idea with us.

What a beautiful tribute! Thanks for explaining how you mounted the items.

A great idea for displaying items to be seen from both sides!