A few weeks ago I found, and bought, two old yearbooks. They were from Guelph Collegiate Institute in Guelph Ontario for 1931 and 1932. Both my parents were born and raised in Guelph and I figured there was a good chance my mother at least would be mentioned in those yearbooks!

Sure enough there she was in a class photo for 1932. What a treasure! She was 16 years old and almost finished her Commercial Classes. 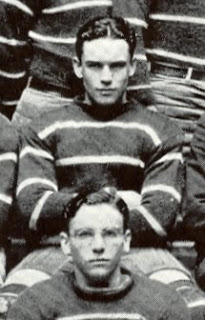 Other surprises in the Yearbooks were photos of Len Peer, my father's cousin. He is with the rest of the Senior Rugby Team in one photo which I have scanned and inserted here. He's the teenage boy at the top.

In the text I also spotted mention of Albert and John McGinnis, more cousins to my father. I am really enjoying going through the yearbooks, not only to look for names of relatives and ancestors, but also just to get a glimpse of what was "in" duing my mom and dad's teenage years.

I was surprised to also find death notices for students who had passed away. I decided to have a hunt for one teenage girl whose photo was with her death notice in 1931 and found her death registration on Ancestry.com

Her death notice and details from her death certificate are on AncestorsAtRest blog.

The ads are amusing from my present-day perspective, as are the musical references but what is being shown and touted as the best, WAS the current rage in 1931 and 1932. It's a piece of history and I'm thrilled to have found these items.

or you can hunt through old bookstores and flea markets to find your own treasure from the past.
at August 12, 2009

Some yearbooks are online, too. I was lucky enough to find evendon.net, a collection of Pittsburgh genealogy references, had my grandparents' yearbooks. Each had a photo and a list of clubs. My grandfather had a thing for physics.

Congrats on your find.
KJ

What a great find! I loved going though my parents yearbooks as a kid. I hadn't though to try and find my grandparents, thanks for the excellent idea:-)

When looking at a high school yearbook, please remember that we were teenagers then and our brains weren't fully developed.