We did it! Reuniting a MIA American soldier's dog tags with family

Recently I was asked for help finding an American MIA from WW2 whose dog tags were found in Germany.

Alex in Germany wrote to tell me about his find for the serviceman Thomas J. Lillard of San Antonio Texas 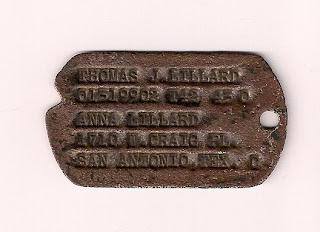 With the help of my readers on AskOliveTree we were able to find out quite a bit about Thomas James Lillard. He was a 1st Lieutenant with the 502nd Parachute Infantry Regiment (RHG) and reported as MIA in November 1945 [should be 1944?] and declared offially dead in 1946.

I found that there was a funeral memorial service for Thomas James Lillard in 1950. His official date of death was noted as in Deudard, Holland November 20, 1944 [San Antonio Light Newspaper] His death certificate is available on pilot.familysearch.org website.

All of our findings were helpful, and the newspaper stories provided the married names of his sisters. Through that, we were able to track down two living relatives - a nephew Walter and a niece.

Soon I connected Walter in USA and Alex in Germany and the emails began to fly.

Walter told me that he remembers his Uncle James (as he was called by the family) and that he specifically recalls the last time he saw him before he shipped overseas in WW2.

" ... He [James], his two older sisters, mother (my grandmother), and stepfather (Uncle James' father was a painter and died of lead poisoning when Uncle James was very young) lived about 50 miles from where I lived on a farm near Comfort, Texas with my mother (Uncle James' sister), my father, two younger brothers, and a younger sister....  Before he shipped out to fight in Europe during WWII, about 1942 or 1943 I would say, Uncle James visited our family at the farm for several days. He was driving a two-door Ford coupe, which vehicle had only two seats and a trunk. Uncle James married a young woman named Pauline Higdon before he left for Europe..."

Walter is overjoyed at connecting with Alex and expressed a desire to speak to Alex on the phone. Alex's English, while good, is not good enough for a phone conversation and he declined, saying that to write and read the emails he needs a book of translations and it takes him quite awhile. So although they will not be able to speak personally, they are communicating quite well and frequently via email

I asked Alex how he came into possession of James' dog tags. Alex bought them at a flea market which sellers of military paraphanalia often frequented. Alex is passionate about military and the men who served and helps take care of WW1 and WW2 graves in a local cemetery. He phoned the man who sold him James' dog tag to try to find out where the seller obtained them. I'm hoping we get some answers!

James' niece also contacted me. She is in possession of all of James letters to his mother during his time overseas, including the ones she wrote him which were returned, unopened, after his death. The family still feels the pain today of their loss with James' death.

Putting the family in contact with the man who holds James' dog tags and knowing that the tags will be returned to them has been a moving and profound experience for me personally. When Alex revealed that he takes a special interest in military men, especially James because he too has a MIA loved one from WW2, I thought of how this was meant to be.

Although Alex' relative and Walter's uncle James fought on opposite sides during WW2, the men have a common bond with their lost loved ones. I pray that Alex will experience some joy in his future and gain knowledge of his MIA relative.

It seems a true case of serendipity and I'm humbled to have been a small part in reuniting James' tags with his family. Without my wonderful readers jumping in to hunt for James' descendants, this would not have happened.  Thank you to all who contributed their time!

Very exciting! what a great story and lovely connection for that family to have and to share with their own decendents!

What a great story. Thank you to everyone who made it happen and to you for sharing it here.