"Soliciting a Continuance of Your Esteemed Patronage...." 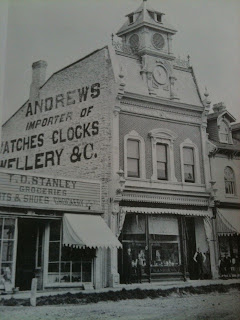 My husband collect ephemera from St. Mary's Ontario Canada. One of his recent acquisitions was hundreds of miscellaneous documents from Andrews Jewellery Store. The documents date from 1870 to 1900 and remained in the Jewellery Store until quite recently.

William's father Henry Andrews was a Stone Mason from Devonshire England who came to Canada West (present day Ontario) in 1855 and William apprenticed as a clerk for a jeweller in St. Mary's before opening his own store. 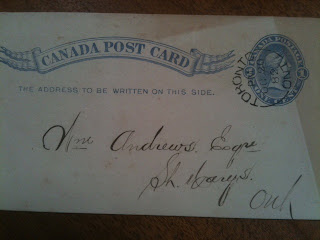 Part of my husband's collection consists of  Post Cards sent from businesses and stores all over Canada to Mr. Andrews. These are not Post Cards as we think of them today. They are receipts for money paid by Mr. Andrews for goods and services.

This image shows one from Toronto and dated October 20, 1882. It is from H. A. Nelson & Sons on Front Street West.  A check of Google books revealed that H. A. Nelson sold brushes and brooms.

"Dear Sir - Your favor to hand enclosing the sum of Twenty-Six /78 Dollars which we have placed to your credit in settlement of invoice of Oct. 10/82.  Returning thanks, and soliciting a continuance of your esteemed patronage, We remain Respectfully yours, H. A Nelson & Sons" 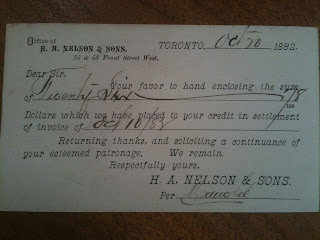 I love this flowery language. I was chuckling to myself thinking how nice it would be if Visa or American Express sent me such a lovely note every time I make a payment.  "Soliciting a continuance" of my "esteemed patronage" .....

Reading through some of the hundreds of documents is delightful and jolts the reader back to another time where courtesy abounded and flowery language was the norm.
at April 11, 2011

I'm looking for any information about Andrews family in St. Mary's. He was an ancestor. This was a good find in Wm. Andrews store.

The St. Mary's Museum could probably provide you with much detail.

Thanks for your informative and helpful site. I've found several photos of my great grandfather and one of great great grandfather through the museum site. Wonderful find.
I'm having difficulty finding Wm.Andrews' mother Mary -- seems she never left England.
Will keep searching.