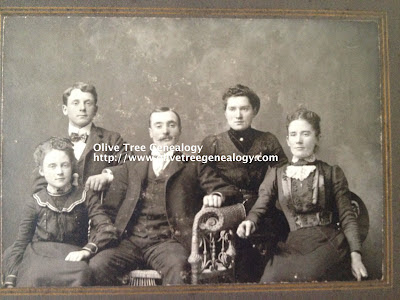 This is the second photo in our collection of rescued photographs of the Hooper and Squires families of St. Mary's Ontario Canada.


To view all the photos in this collection as they are published here on Olive Tree Genealogy blog, click on Hooper-Squires Photo Archives link.

We know that the young boy standing is Edgar Hooper and seated are his father John Hooper and mother Kezia Perkins. Given Edgar's birth year we estimate the photo was taken no later than 1907.

Edgar had a sister Edith born in 1889 so perhaps this is the young woman standing behind John and Keziah. Ella, another sister, was born in 1898 so it is possible she is the younger girl. However we are missing other children - Eva born 1895 and Milton born 1892.

The family group consists of children:

I love looking at old family photos and trying to identify them. I've been trying to do some old photo identification" from a 19th century family photo album I acquired.