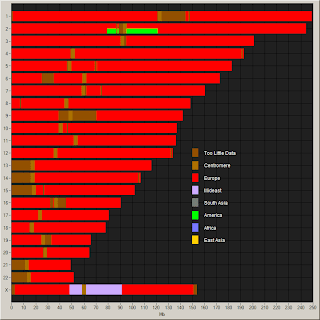 Recently I talked about DNA and Native American Heritage. I'm a recognized Metis in Canada. I have my official Metis card. But I hoped for confirmation of my Native American heritage through DNA testing.


Through the kindness of a stranger on an online forum I learned that a Professor with the University of Chicago does in-depth DNA analysis of individuals' raw data to determine your ethnic origins.


Well I'm very pleased to say that the Professor's computerized analysis of my brother's Family Tree DNA raw data gave the answer I'd hoped for - he has .7% Native American heritage.

Along with his analysis, Professor MacDonald sent a computer generated map, a bar graph, a scatter graph and a 5 page explanation of how to read and understand the generated pages.

I also ordered an upgrade to my brother's Y-DNA test on Family Tree DNA  for D9S919 which was suggested by Roberta Estes in her blog post Proving Native American Ancestry Using DNA .

Since I was advised to consult the FamilyTree DNA Help desk for answers, I wrote to them on January 14th.  My question was simple:

I've had  my brother's Y-DNA tested (also Family Finder for him) at Family Tree DNA.  What test or upgrade do I order to test for Native American heritage?

Yesterday I received a detailed response which began

The Help Desk went to provide a detailed explanation of the test for Y-DNA, MtDNA and Family Finder

Interesting enough, Family Tree DNA help desk did not suggest I order the test for Marker D9S919 which is available on their site.  I'm not sure why this wasn't suggested, but I'm not an expert and can only go by what Roberta and other online websites indicate.

For instance, the International Society of Genetic Genealogy states:

"D9S919 is a STR marker located on chromosome 9. It was previously known as D9S1120 and under this name it was reported that an allele value of 9 was only found in the Americas and far eastern Asia. The presence of an allele value of 9 is therefore a strong indication of native american ancestry somewhere within a person's pedigree. This marker is available from Family Tree DNA."

Indeed it is. For a small fee of $15.00 I was able to order the test of this specific marker on the  Family Tree DNA website.

I had previously ordered Family Finder but it did not show our Native heritage - which was no surprise because Family Tree DNA pointed out that you must have 3% or more for the test to show your Native American heritage.

Help Desk provided a welcome explanation of the three tests that could determine Native American heritage but I am curious why they didn't advise me to order the $15.00 test for the D9S919 marker. My conclusion is that the onus is on the individual to explore and read everything he or she can find that might give the answers being sought. Or in other words, don't give up even if you hit a dead end! Keep looking for alternate answers. It's just like doing genealogy research.
at January 19, 2013

seems like they would have put you on to it, money in their pocket