It's Not Just Loyalists! (A Misleading Title on Ancestry)

Recently I poked around a database record set on Ancestry.com

There is more detail given in the description but every sentence stresses that this database provides names and details of Loyalists, those who fled the Colonies during and after the Revolutionary War 1775-1783. However this is incorrect! Badly incorrect. 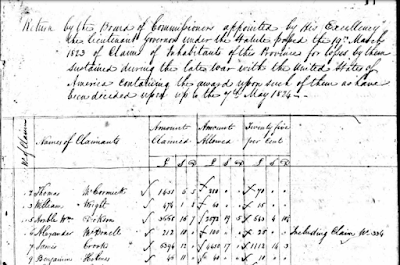 Yes there are some Loyalist claims and documents in this set of records. But a very quick look in Series II (AO 13) reveals that in the section titled "American-Loyalist Claims Series II (140) Miscellaneous 1801-1835", we find Claims for Losses in Upper Canada after the War of 1812.

These claims for losses were not filed by Loyalists but by ordinary citizens who suffered at the hands of the Americans or the Indians during that War. This specific (and valuable!) list of those filing claims is dated May 1824 and begins on image 15 of 228. It ends on image 49 at claimant number 2054.

It's an invaluable database but sadly not many researchers will find it since it is not listed correctly on Ancestry.com

. And for those who do stumble on it by searching and finding an ancestor's name, they are almost certain to think that finding that name in this database means that their ancestor was a Loyalist.

Please don't be fooled. When searching a large database, be sure to scroll back to the start of the specific section your ancestor's name is on. Look for the title of that specific set of records so that you know what you have found and can provide an accurate and correct source for the information.

Thankyou for pointing this out!

Thank you! Excellent point about looking to see the title of the section your relative is in.

Thank you for telling us about this. I wanted to let you know that I've included your post in my NoteWorthy Reads this week: http://jahcmft.blogspot.com/2015/07/noteworthy-reads-20.html

Thanks for the useful clarification! And as far as scrolling back to check the title of the exact section in which your target name is listed, this applies to city directories too. I have great-grandparents who spent their adult lives in Oregon City, OR but whose names in a late 1890s city directory are listed on Ancestry as living in nearby Portland. I know they never lived in Portland. By scrolling back to the beginning of "their" section I discovered this was a combined directory for both towns, though it didn't list as such on Ancestry and the division between the two towns was not highlighted very well within the directory. Once the two towns were big enough for the publisher, Polk, to justify giving each their own directory my g-grandparents were magically back in Oregon City where they belonged.