The Mystery of Hilda's Foot 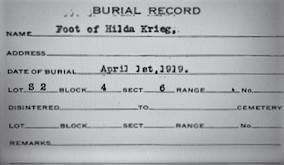 The burial of Hilda's foot apparently took place in Union Cemetery in Milwaukee, Wisconsin in 1919.

Katherine wanted to know if any of us in the genealogy community had ever seen anything like this. We had not. But of course, being avid genealogists, several of us went on a hunt for Hilda, hoping to find out what the story was behind this odd burial.

As you can probably imagine, we had a lot of guesses as to how Hilda lost her foot and perhaps more importantly, why she had it buried. Was her body destroyed in an accident and only the foot remained? Was the foot amputated for health reasons and her religious beliefs required that she bury the foot until she died and could be buried with it?

Then I found the following story in the Wisconsin State Journal (Madison, Wisconsin) 04 Aug 1920, Wed Page 10 which explained what happened to Hilda and her foot. 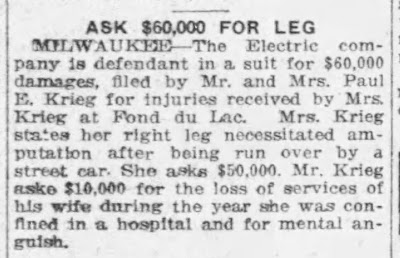 It remains a mystery as to why Hilda had her foot buried in one cemetery and her body in another.

What was the date of the burial of the foot?

Some years ago, I came across a 1968 burial record for a man's amputated legs in the Ottawa Beechwood Cemetery records. They were interred in common ground, not a grave. After I recovered my composure, I tried to learn more about him but eventually gave up the chase. Your post has inspired me to try again.

While working on cemetery records of Yuma, Arizona, many years ago, I ran across a burial record for one arm.
There was no other information like a name.
This may have been a proper way to dispose of body parts. Religious consideration should also be considered.

Well...that’s not something you see every day. Poor Hilda, it must have been terrible having that accident. But, why bury just the foot and not the whole leg....oh wait, why bury the body part at all? Our ancestors never cease to amaze us. Thanks for sharing Hilda's story.

Gen. Stonewall Jackson's arm was buried in a separate grave.