A Death Too Young - the Story of Alfred R. Cousins 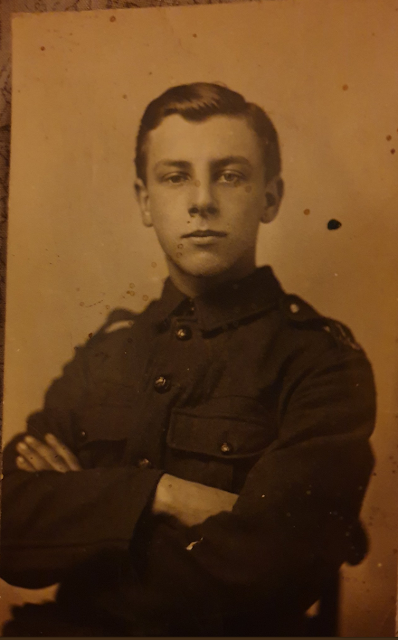 Over on Twitter Olive Tree Genealogy was lucky enough to spot a tweet from Stephen who posted a photo of a handsome young soldier.

A photo from 1915 along with a newspaper clipping about the guy featured fell out of an old book I bought today.

Stephen later added in a private message to me, that the book, King Edward's Realm, had a leather embossed cover and gilt lettering on the spine. It makes sense that it would be kept and passed on from generation to generation. Books are not something most of us would throw out, especially one that special.

Someone tucked this photo into the book where it probably lay, forgotten over the passage of time.

The photo of this young soldier intrigued and saddened me. I wanted to know more about him and his family. And I wanted the world to remember him! Alfred should not be forgotten.

Someone cared enough about him to keep his photo and death notice tucked safely away in a book.

I asked Stephen permission to post the photo and newspaper clipping on Olive Tree Genealogy blog, and on my Lost Faces website.  He kindly agreed.

The tattered newspaper clipping that was in the book mentioned that young Alfred was killed at Gallipoli, that disastrous and bloody campaign of 1914-1915 that saw almost 57,000 Allied troops killed and 124,000 wounded. 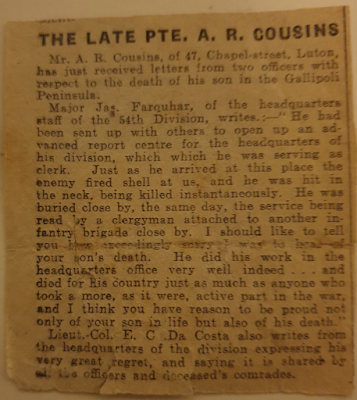 A search of military casualities from WW1 found that Alfred was killed 22 August 1915. He is listed as Alfred Richard Cousins from Luton England. At the time of his death he was a Private in the 5th Batallion of the Bedfordshire Regiment. Regimental Number 4461 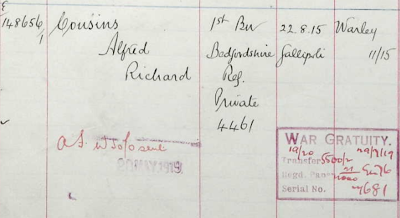 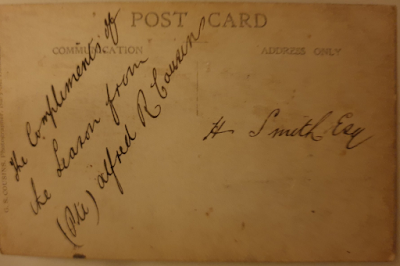 The Compliments of the Season from (Pte) Alfred R. Cousin
(to) H. Smith Esq.

On 20 September 1915 the Luton Reporter carried the news of Alfred's death.

Another story of Alfred's death was published in  Luton Times and Advertiser on Friday 10 September 1915 in which a letter is mentioned. It was written by the soldier who was talking to him at the moment the shell struck and killed him and in the letter he encloses Alfred's cap badge to be given to the sister Elsie as a remembrance of her brother. 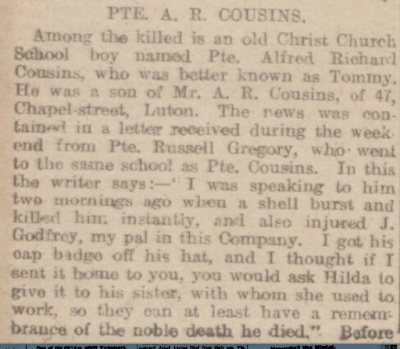 Sapper Russell Gregory, who was with the 1st Signal Company, East Anglian Royal Engineers, wrote to his parents on August 25, 1915:  "I was talking with him [Pte Cousins] two mornings ago when a shell burst and killed him instantly. I got his cap badge off his hat, and I thought if I sent it home to you, you would ask Hilda to give it to his sister, with whom she used to work, so they can at least have a remembrance of the noble death he died."

A brief mention of Alfred's death was found in the Luton Reporter on Monday 01 May 1916 where it was mentioned that "one of their Sunday School teachers, Alfred Cousins, had given his life for his country" And so we learn a few more things about young Alfred and his short life.

Alfred's last letter dated August 20, 1915 was written two days before he was killed and is a poignant reminder of how fleeting life can be. In it he wrote: "The regiment is progressing well, but I am afraid to mention anything about them is to ask for the thick black line of the censor across it. The only thing I can say is that I am more than proud of them."

Alfred's story begins with his birth in Bedfordshire in October 1894. His father was  Richard Alfred Cousins, born circa 1860 in St. Ives. His mother was Elizabeth Shelton who Richard married in 1888. 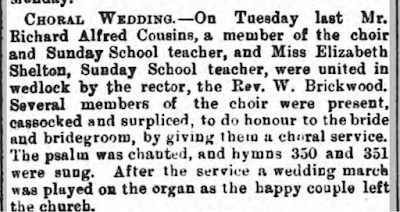 It appears that little Alfred's mother Elizabeth may have died when Alfred was born because she is noted in the Bedfordshire Times and Independent on Saturday 20 October 1894 as having died ate age 32 on October 9, 1894. In 1900 father Richard married Susan Sharp.

In the 1911 census of Luton we find the family as Richard 51, Susan 53, Elsie 19, Aflred R., 16 and a niece Rose Mabel Dodsen age 22. The census notes that Susan and Richard had no children and had been married 10 years. Father Richard is a caretaker at a local church, Elsie was a milliner and Alfred was a clerk. The family lived in a 5-room home on Chapel Street in Luton Bedfordshire. In March 1945 Alfred's father died. Could he have been the person who tucked his son's photo and death notice in the book? Perhaps it was Alfred's older sister Elsie? Alfred also had an older brother Arthur J. Cousins born circa 1889. British Army Pensions Records from WW1 reveal that Arthur also enlisted in the military but survived the war. He gives his mother's name as Lilly so perhaps Richard married several times or Lilly was Elizabeth's nickname.

Although this story was to be about Alfred, I was curious if there might be descendants of his brother or sister who might find the finding of the photo and clipping of interest. Further research revealed that Arthur was the subject of a complaint filed in 1922 stating that he was not paying support money owed for his child by one Violet R. Abrahams.

In your next article you mention not being able to find descendants to his sister. I looked on Free BMD and found a birth in Luton, Jun Q 1919
Hayward Alfred H mother Cousins Luton 3b 472
Sadly he too died, 16 Jul 1944
Son of Edwin Claridge Hayward and Elsie Hayward, of Luton, Bedfordshire.
Link
https://www.cwgc.org/find/find-war-dead
In the UK we use FreeBMD but I also use findmypast.com and ancestry who all give me dates up to 2006 ish..it changes regularly. Using these maybe you can find more about the others.