Manhood Franchise: An Interesting Puzzle in an 1890 Voters' List 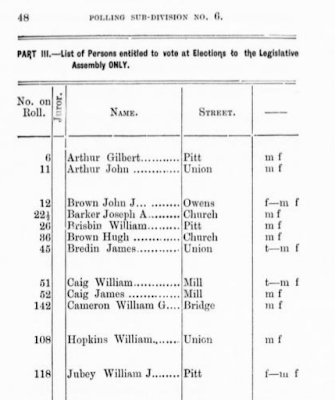 The 1890 Voter's List for Picton Ontario has a puzzling set of descriptors. The last column on each page does not have a heading. As well the codes used are not listed.

Looking at the first pages of the booklet is no help. Usually short forms are defined but not this time.

If we look through this booklet we find that the names in alphabetical order are all men in Part I. 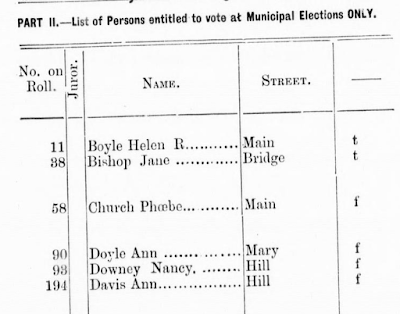 Our first clue as to the meaning of "m f" comes with the start of Part II and the title "List of persons entitled to vote at Municipal Elections ONLY". All the names that follow are females and each one has either a "t" or an "f". They never have the puzzling "m f" in the last column..

Since before 1935 Voter's Lists for Municipal Elections were used for Federal Elections as well. So this seems to indicate the women could not vote in Federal elections when the list was taken, but could vote in municipal.

Canada did not give women the vote until 1918 (except for Quebec which did not allow female voters until 1940). In 1884 a law was passed giving single or widowed women who owned property and who lived in Ontario or Quebec the right to vote in Municipal Elections.

Using all these known facts, it seems likely that the women on this list had the right to vote in municipal elections but not federal, and that the men were indicated as being eligible for both by having the mark "m f" after their names. It follows that it is equally likely that "m f" stood for "manhood franchise"

If any of my readers has a source that indicates what "m f" stands for, please share it in the comments. My suggestion is based on evaluating the clues and I do not know with certainty if I am correct.
at July 17, 2019