Search for Ancestors in Insane Asylums 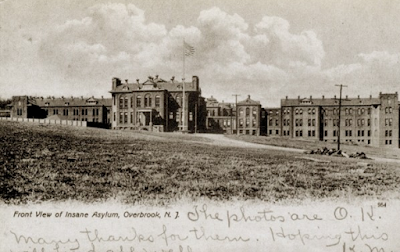 Sometimes our ancestors ended up in Insane Asylums not because they were insane but for other reasons - post partum depression in women, menopause, depression... any number of occurrences could land an individual in an asylum.

Olive Tree Genealogy has an Insane Asylum section which includes England, Scotland, Australia and Canada. One database in particular may be of interest to Canadian genealogists.

Another book with the same topic that genealogists and others might find interesting is "Annie's Ghost" by Steve Luxenberg. It takes him to the Ukraine and Russia and then back to Detroit. I read it about eight years ago and was completely fascinated by how he searched and found information about a family member he did not know existed--his mother's sister.
Ina Getzoff

A book that genealogists and others might find interesting on this same topic is "Annie's Ghost" by Steve Luxenberg. It takes him to Eastern Europe, Russia, and back to Detroit after he finds out about a relative he did not know existed for many years--his mother's younger sister. I found this story to be totally fascinating following his tracks from one place to another and how he verified what the actual truth was. I hope others will read and enjoy it.

Thanks for the recommendation, mystical 2011. That book has been on my to-read list for a while. I've just bumped it to the head of the line.