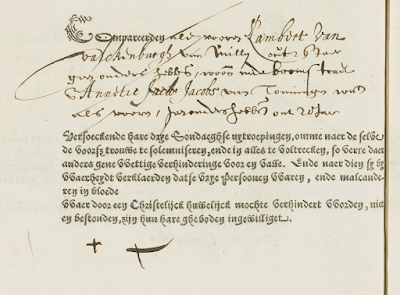 His name was recorded as Lambert van Valckenburgh, his bride as Annetje Jacobs. [Source: DTB 457, p.146]

He sailed to the New World before 1644 and settled on what is now the site of the Empire State Building in New York.

Many genealogists are not sure where or how they can find more information on an ancestor in New Netherland (present day New York) but there are many resources available, both online and off.

For example here is a document which I found online for Lambert. 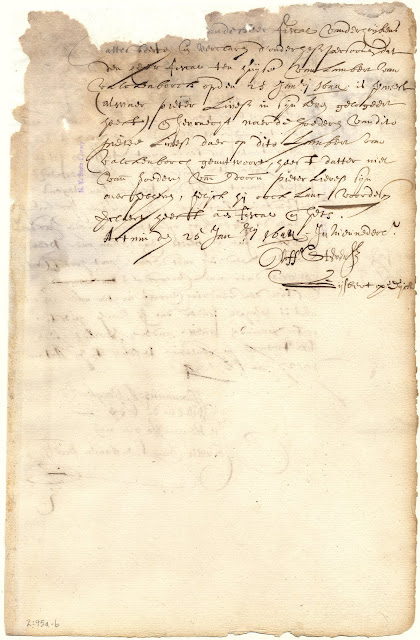 Declaration as to the estate left by Pieter Lievesen, deceased

[ At the request ] of the honorable Fiscal Vander Hoykens the undersigned persons attest and declare that on the 25th of January 1644 the fiscal was at the house of Lambert van Valckenborch, where Pieter Livesen lodged in his lifetime, and inquired for the goods of said Pieter Livesen, whereupon Lambert van Valckenborch answered that there was nothing left of the goods of the above mentioned Pieter Lievesen, as he had long before also declared to the fiscal and the witnesses. Done the 25th of January 1644, in New Netherland.
Oloff Stevensen
Gysbert op Dyck
References
Translation: Scott, K., & Stryker-Rodda, K. (Ed.). New York Historical Manuscripts: Dutch, Vol. 2, Register of the Provincial Secretary, 1642-1647 (A. Van Laer, Trans.).

Hello! Lambert is my 9th great grandfather! We must be related. I hope this comment works so we can connect.

Hi Colleen - just wrote to you via email