What is Your Oldest Ancestral Item? 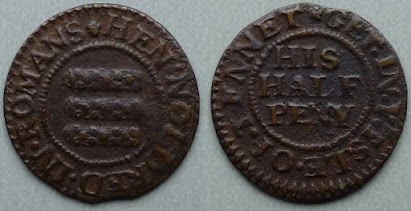 It's always a thrill to inherit or find an object that once belonged to an ancestor. I had chills when I found store tokens made by my 9th great-grandfather Henry Noldred of Ramsgate Kent England. Henry was a grocer who had his own tokens created to spend in his store in place of official money.

I was so intrigued by this new-found information that I started researching to see if I could find any of his tokens and I found that one of his existed created circa 1650!. I also learned that Ramsgate was spelled Romansgate back then. Once I found that one of Henry's tokens had been sold on an auction site a few months before, I became determined to find another and purchase it. I'm excited to say I succeeded! I managed to find two in England, and I bought them both. I plan on having a small plaque made with Henry's birth, death and location. Then I'll have the tokens and the plaque framed and it will have a place of honour on my wall.

This is the description of the tokens: (rosette)HEN.NOLDRED.IN.ROMANS , around beaded inner circle, three tobacco rolls / logs of wood.

Rev: (rosette)GET.IN.YE.ISLE.OF.TENNET , around beaded inner circle, HIS HALF PENY in three lines. M. Dickinson 454. Neither obverse or reverse dies represented in Norweb.

What is the oldest ancestral item you own?

I wonder what could be purchased with a half penny in your ancestor's stock? Or how long it would take to earn that amount. Might be interesting to have that context added to the plaque's labelling.

Probably a pair of brown leather baby boots worn by my grandmother in 1896.

A journal of My Great Grandmother's which she started on January 5, 1899 and continued until her death in October of 1940 .