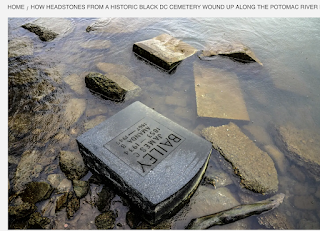 Stones dont "wash up" on anything. They were thrown there. Dirt and branches may have at one time covered them and the river washed out the shore, removing the dirt and other debris. But you will not ever see a stone "wash up" to the shore.

I agree. Stone does not float. It can be moved by strong water flow, but I also believe that more than likely, these stones were dumped at this location and thought they would never be noticed. Cemeteries should never be relocated anyway, for any reason.The final resting places of human beings are just as important as any 'urban development'. This is the same nonsense that happened in South Carolina, where a crews of the Confederate submarine Hunley were paved over for a parking lot of a football field. Some of the graves were later located under the field itself.

Build around them. Leave cemeteries alone.