Carnival of Genealogy: My Famous Canadian Ancestor in the Circus

Albert George Marriott and his twin brother were my 3rd cousins, twice removed. Both were born in Guelph Ontario in June 1882. The winning of a baton contest in the old Guelph skating rink gave the Marriott twins their start for 60 years in show business. They started off in Downie Brothers Circus as jugglers on bicycles but in later years developed an arial act, and gained international fame. 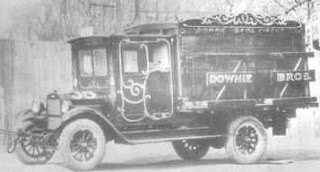 ANDREW DOWNIE'S CIRCUS made several successful visits around the turn of the century. For a one-ring show hauled overland by wagons, Downie achieved maximum results from 50 performers and a profusion of animals

In 1896 the twins joined the Harry Lindely Dramatic Company, playing in Canada up to Dawson City in the Yukon. Engagements with other companies included the Andrew Downie Company of Vancouver.

It was with the Downie circus that the Marriotts orignated their bicycle juggling act which they repeated at the opening of Tony Pastor's Theatre in New York.

"We played with the Orrin Circus in Mexico for three years then going to the Million Dollar Theatre in Buenos Aires, Argentina for six months." [letter from Al Marriott]

..."My research found Albert and his wife Maud as passengers on board the SS Verdi from Buenos Aires to New York. They are listed as "theatrical artists"

"Next came several months at theatres in Havana Cuba. On five occasions we played return engagements in front of the grandstand at Toronto Exhibition and making appearances before the Prince of Wales" [letter from Al Marriott]

I found Albert and his twin brother (whose name is uncertain, in various records it appears as Menard, Murray and Manet) sailing back to New York from Havana Cuba in 1907.

The Marriott Twins were booked for a world tour and played the large cities of Europe and other continents. Following this was a booking to represent the USA at th ePan-Pacific Peace Exposition at Nagoya Japan for six months.

Among the engagements was one with President Truman at a county fair in Missouri and the following week at Washington DC. There followed references in Al Marriott's letter to numreous other engagements including seven years at the Hippodrome in New York.

In later years with the coming of the aeroplane their act took the form of a large plane mounted on a high tower. The players performed on a trapeze hanging from the plane, as well as being fastened to the propeller. The home of Mr. and Mrs. Al Marriott is now Georgia [Guelph Mercury Sept 21, 1939: The Marriott Twins Scored World Fame]

Searching for Albert, his wife and his twin brother in the various genealogy records has proven rather challenging. To date I have found Albert and his twin's birth records in the Ontario Vital Statistics. They are found in 1891 and 1901 census for Guelph Ontario. Interestingly in 1901 Albert, age 18 is listed as a Hardware Clerk while his brother is listed as a photographer.

In the 1930 census for Michigan, Albert and his wife are listed as vaudeville performers. The various ships passenger lists I have found them in lists them as jugglers, arial artists and theatrical artists. I am still hunting for a photograph or poster of the twin brothers' act.
at December 07, 2008

Greetings Lorine,
Okay now I'm jealous! LOL! You have some of the most interesting ancestors.
Kathryn

Hello. My grandfather, Jerome T. Harriman, spent most of his circus career with Andrew Downie and Charles Sparks as general agent. I have a model of the Downie Brothers Big Top that was used as a toy by my father. It is complete with a trapese. Let me know if you would like a photo.
Regards,
Mark Harriman
(mark@harriman.org)

Lorine, This is Perry from Hood River, OR and I'm on your site looking at LaTena (Hewer) McPhee's circus history ! Was following up on family stories about her... She was my grandfathers antie, but the same age as he and I have some pics of the two of them... Want to see them? Perry

Hi Mark, Where did you find that newspaper article about my grandmother and your grandfather Jerome?
June