My second cousin three times removed, Stephen David Peer (whose flyer proclaims him as Professor Steve Peere), walked Niagara Falls on a tighrope, then fell or was pushed to his death a few days later on 25 June 1887.

Stephen started out as an assistant to the famous tightrope walker Henry Bellini in 1873. Watching Blondin and Bellini perform their walks was his inspiration to walk the falls himself.

Stephen Peer was born in Stamford Township in 1840. He was nineteen when Blondin performed the first of his many tight rope walking feats at Niagara Falls. Peer became determined to become the first real "Niagaran" to walk the Gorge. In 1873 he became an assistant to Henry Bellini, he then illicitly used Bellini's equipment to perform his own first stunt. Bellini was not amused and attempted to cut down the tight rope. The residents chased him out of town, after all Peer was the home town boy ! By 1887 he had become famous enough to begin performing under his own billing and on June 22, 1887 he successfully walked on a wire cable stretched between the present Whirlpool Bridge and the Pen Central Bridge. Three days later he went to the platform from which he had started his crossing, with friends. Speculation is that they had been drinking, Peer began to walk across the cable and fell forty five feet to his death 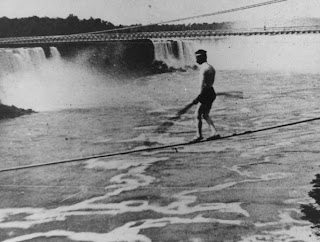 The first report of his successful first walk across the Falls follows:

Niagara Falls Ont. June 22 Steve Peer, a local tight rope walker, crossed the Niagara River on a 5/8 inch cable stretched from the Canadian to the American side between the Cantilever and Suspension bridges at 4 o’clock this afternoon successfully. A stiff breeze was blowing during the time, and the cable was not properly guyed and he says that several times he very nearly lost his balance from its vibrations. Several thousand people witnessed the daring performance. Peer will repeat his performance several times during the season. "

The Canadian author Pierre Berton wrote about Stephen's walk and mysterious death in his book Niagara: A History of the Falls

It was unusually windy on June 22, 1887, but Peer gave his performance as scheduled. His five-eighths inch cable was a mere thread compared to the heavier ropes of his prdecessors, and the wire was held steady by 20-30 guy wires and weighted down between them with 12-20 sandbags, each weighing about 35 lbs. His walk was a complete success, and he returned to Canada in a carriage via the suspension bridge, welcomed by thousand sof applauding spectators. Three days later he ws dead, discovered on the gorge bank below his cable. The reason for his death remains a mystery, but stories suggest murder.
at December 06, 2008

Greetings Lorine,
What an interesting ancestor with an incredible story! Do you think he fell or was he pushed?
Thanks for participating in this edition of the CGC.
Kathryn

The family has always believed it was murder. The official verdict on his death registration is "Suicide"