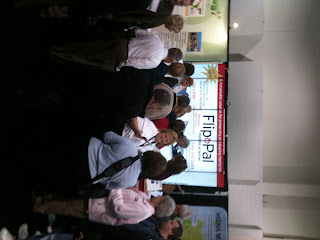 The Flip-Pal booth in the RootsTech Exhibit Hall was humming and packed with crowds every time I went by. For those who’ve been out of touch the past few months, the  Flip-Pal Mobile Scanner is the latest “must have” for genealogists. Facebook has been buzzing with comments from genealogists such as “this is on my Christmas/Valentine’s Day/Birthday wish list!”

is small, lightweight and does a top-notch job scanning photographs, documents and just about anything you can think of. The built in software that installs on your computer allows for simple editing and stitching together of individual scans of larger items.

When I stopped at the Flip-Pal booth I chatted with a member of the Marketing team named Walt, who told me that there are new developments planned for the future. He also informed me that Couragent, Inc. (formerly Rocky Mountain Ventures Company) announced recently that the Flip-Pal™ EasyStitch software is now available for Mac computers. The latest software for both Mac and Windows is available to customers on the company website, www.flip-pal.com/customer-care, in the Downloads section.

Walt mentioned that "It is fascinating to hear all the different ways people wanted to use a Flip-Pal mobile scanner to collect genealogy information: pictures, documents, personal writings of ancestors and even scanning gravestones."

Walt introduced me to Diane, another marketing team member and part of the design team for the user interface and we had a brief chat. The crowds were clamoring for attention so I didn’t take up too much of her time. She did show me something they had brought to RootsTech to get a feel for reaction to it.

It's not a go and they didn't want me to share photos of it  but since 3,000 participants had an opportunity to take a peek, I will tell you what it was - covers or skins for the lid! I loved them and would have bought one immediately if they'd been in production and available. Fingers crossed that FlipPal goes ahead with the idea. If they do, I'll let you know about it here.

Walt sent me an email after I arrived home from RootsTech to tell me that they had 2 shipments of Flip-Pal™ mobile scanners and sold out both times. The booth sold out the first day and after the second shipment arrived the second day, they sold out of that as well. Every day of the show saw customers coming by the booth well before the show officially opened and until after the lights were dimmed in the evening. You can’t ask for more success than that.

How is it on batteries?
Can caring on an airplane? I am planning a trip to do research and would like something like this.

I used mine last summer when I was visiting many relatives back east and scanning all kinds of photos and documents. I found that I got around 140 scans per set of batteries. However, that was with continuous scanning and with very hot weather.

I carried mine on the airplane with no problem at all. Wasn't checked at all going through security.

I love the Flip-Pal but I think I would like to have a slightly larger format. Maybe they'll make an 8" x 10"model soon - I think I read rumors of that somewhere.

can you do a collage with flip-pal?

How much noise does the Flip Pal make? It'd be great to take to the library but I'm wondering if it would annoy researchers sitting close by...

It is very quiet while scanning. It makes a slightly different, longer sound when scanning at 600 dpi.

I am interested in what the Flip-Pal can do with negatives and slides. Any comments from anyone?

I followed a webinar a few days ago and the question about scanning slides and negatives was raised. The response was "no, you cannot scan slides or negatives...." something to do with the amount of back light that would be required.