Some of Olive Tree Genealogy blog readers know about my good luck genealogy-wise on a day last week when I was bored. Well, my good luck continued the next day!

After the success I had finding genealogical information about my 3rd great grandfather John Sandwell Stead and his wife (my 3rd great grandmother) Emma Sutton and her parents and siblings, I decided to google a few more ancestor names.

Since this wasn't my usual methodical search method, I opted to continue with the random typing of ancestor names and places of birth into various search engines. Maybe Stead was a good one to continue with and yep - there it was - a hit on one of my Stead "relatives" from Australia. This hit interested me because the blurb showed that Ramsgate was also mentioned.

Ramsgate England is where my Stead ancestors were from and some settled in Australia in the mid 19th century. In fact my 2nd great grandmother Sarah Stead (nee Elvery) died in Sydney Australia in 1867 on her way from Ramsgate to make a new life there with her husband and children.

What I'd found in my search was a 2009 newsletter called "About Ramsgate" in .pdf format. Included in the newsletter were extracts (and photos) from several 1923 letters sent by Jessie Broadfoot Stead to her family in Australia while she was visiting relatives in Ramsgate.  Jessie was my great-grandmother's cousin through their grandparents John Sandwell Stead and Emma Sutton (my 3rd great grandparents).

The letters were fascinating, as Jessie was a very detailed and descriptive writer. Never having been to Ramsgate personally, I enjoyed reading about the town and the people and Jessie's impressions. She also talked about the social customs and the food, all of which I found interesting as  I could imagine my great grandmother Sarah Simpson (nee Stead) being part of it all. 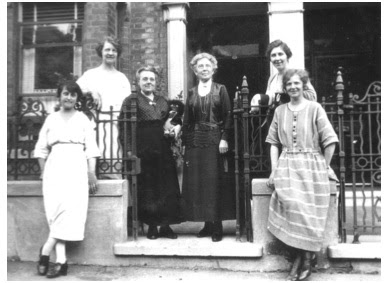 Then came the surprise.  Among the photos published was a photo of six women in front of a house. The caption read

The author of the article with Jessie's letters and photos explained that his aunt Jessie had boarded a few weeks at 40 Grove Road.

What astounded me was that I own the identical photograph! It was given to me by my mother many years ago and I know who two of the women are in it.

The lady third from the left is my great-grandmother Sarah Jane Simpson, nee Stead and beside her (4th from the left) is her sister-in-law Jane Stead nee Kingsland.

In fact my great-grandfather David George Simpson died in that home in 1921.

I never knew who the other women were or when the photo was taken although I knew it was taken in Ramsgate. Now I know one other woman - Jessie Broadfoot Stead. Perhaps one day the identities of the other women (no doubt Stead cousins or in-laws) will come to light.

All I can say, Lorine, is WOW!!!! What a beautiful photo and now more identifications and added information. This was certainly a worthwhile search effort. How blessed you are. I'm truly happy for you!

This absolutely takes my breath away. What a wonderful success story. Thank you for sharing.

Wonderful! Serendipity off the beaten path. Love the photo of those strong women too.

OOO, fun, what a glorious research week you are having! Shivers of excitement.

Thanks gals - I've always loved that photo. It's more casual than a studio photo, yet it's nicely framed, in focus and the women look like they are really having a nice time.

Fingers crossed that one day I'll find out who the other women were. Love seeing a photo breathe life into ancestors.

Megan Smolenyak says that there's a lot of serendipity in genealogy because our ancestors want to be found. And I think that computers and the internet were inspired inventions for this very purpose. Great fun!!

What a great photo of strong, confident women! Those are always good to keep on display. I love the last comment about our ancestors wanting to be found. I love that thought. I Google names and combinations and dates and cities constantly... more as a time-waster than as research, but I've found interesting things and clues and details about lives that I would never have found in a census or death certificate.

Great discoveries! Have you tried http://trove.nla.gov.au/newspaper for your Australian connections?

Shelley, yes I love Trove. In fact I featured it in one of my blog posts

I am a descendant of William Stead son of John Sandwell Stead. Your posts have filled in some blanks in the history handed down to me. Thank you. colin.stead@telcomail.com.au

I have just sent you an email. I assume you are from one of the sons that William (also my ancestor) left behind in Australia in 1867?

He returned to England with one son and my great grandmother Sarah Stead who married David Simpson.

Looking forward to sharing with you by email
Lorine

I once was able to confirm a relationship with an "internet" cousin because we owned the same photo of a family in front of a house. He could identify half, and I could identify the other half.

What a great story, Peg! Love it!