is the ability to sit on the couch and scan photos.

It's not just for packing up and taking on the road on trips to Libraries, Archives or Museums (although it's terrific for that!)

After sitting most of the day at my main computer I want a change. So my evenings are perfect for relaxing in a comfy chair or on the couch with my Flip-Pal Mobile Scanner on my lap. It's small. It's so light I'm hardly aware it's on my lap.

Yesterday I spent some time documenting one of my Civil War Era Photo Albums that I buy and then put online on Lost Faces.

After I take camera shots of each page of the intact album, I carefully remove the photos and begin scanning them front and back.

With my Flip-Pal Mobile Scanner

I can watch TV at the same time, or sit on the couch, which is much more comfortable than my computer chair. Because I'm scanning CDVs and tintypes I can scan two at a time. 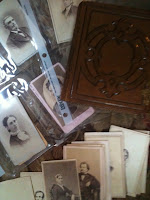 When I transfer the scans to my computer (easy using the Flip-Pal USB port converter) I simply save two copies of each scan, then I open each one in Picasa (or any photo editing software) and crop the scans so I have one photo per image.

It's fast, it's easy and it's fun! After I scan each photo I place them in archival sleeves and then they go into an archival binder. Then more fun because that's when I start doing research to find the individuals named in the album!

The album I documented and scanned and archived yesterday turns out to be for a Quaker family named Smith Battey and his wife Ruth Aldrich who lived in Rhode Island.

It didn't take long to realize what a gem this album is. It contains 31 CDVs and tintypes, including some of Smith Battey, his wife Ruth and three of their children (as adults): Thomas, Nancy and Phoebe.  But I'll talk more about the Battey Photo Album another day.
at October 19, 2011

gotta get me one! I love the idea that you can do it from your lap, I certainly would do a lot more scanning based on that selling feature alone.

Question Lorine, I know you live in Canada as do I. How much was shipping, were there any extra taxes and duty you had to pay at the border?

My only wish is that it were a bit larger so I could scan cabinet photos in one pass. I agree - it's a blast researching these treasures and occasionally hearing from descendants!

Lynn, I forget how much shipping was but I think it is on the Flip-Pal website. It was very reasonable.

There were no extra taxes, no duty, no customs handling fee at the border :-)

Next on my list. Or maybe a Christmas wish...

I got my Flip-Pal last Christmas on your recommendation and I love it, too. I love being able to do it while watching TV or while visiting a relative... keeping the conversation going while I'm scanning every picture in their boxes and books.

I bought a Flip-Pal about six months ago. It is the most useful genealogical tool I ever bought. With a little practice and the supplied software you can make scans the equal of any.

During a recent visit, my 8yr old granddaughter got a little taste of family and genealogy when she helped scan photos from an album I inherited from one of my great uncles. Photos were from the 1920s through early 1950s and he had written names in the margin of each 2"x3" picture. I knew immediately who the people were and how they fit into the family, so sharing that with Holley (and her mom) was great fun.

I'm so glad I read your first review of the Flip-Pal and purchased it right away. It is the BEST genealogy tool....

Pat by the ocean said...

No one has mentioned the "built in"stitching software. On a recent trip to a cousin I finally found an 1899 group photo of one of my ancestors. I made 8 scans of the photo making sure I had the 1 inch overlapping margins. Stitching the scans together was very easy. I am now planning to visit all my cousins! They don't know it yet but I plan to be a pest until I get to see their old family photos because they don't know what they have!