A WW1 Photo Album is Discovered

In 1998 my mother's cousin passed away. She was a 90 year old single woman who still lived in the house where she was born in Toronto Ontario. All her photo albums and papers were given to me. I was thrilled but there were quite a few albums to go through and I confess I never finished the job!

At the time I'd been so thrilled at finding a photo album from the late 1800s which was full of lovely Cabinet Cards of my ancestors, that I'd only glanced quickly through all the other albums. Then I set them aside to go through more carefully at a later date.

In 2009 my aunt Lily passed away. She was 89 and had been a widow since WW2. I was given all her photo albums too. After a cursory look through the lot, I felt so overwhelmed that I added them to Doris' tub.

This past weekend I finally started going through that large tub of photo albums. I confess I'm still feeling overwhelmed at the task ahead of me but I'm trying to  focus on one album at a time.

The first thing I did was to take all the albums and miscellaneous items out of the tub and do a quick sort. That allowed me to easily determine which albums belonged to Doris and were the earliest, and which had come from Lily's home. 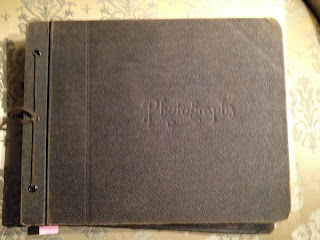 Here is the first album from Doris. It's in amazing condition and is 7 1/2x9 1/2 inches, bound with brown cord.

There are 22 double-sided pages and photos have been glued or placed on each, including the inside front and back covers.

It was easy to determine the dates for this album as the pages have many WW1 soldiers' pictures and also photos of my aunt Lily as a baby. She was born in 1915. Sadly most of these photos are glued directly on the album pages so I'm going to have to think about how to handle this problem.

Meantime my plan is to take camera photos of each page, and each photo on each page, then scan the photos on my large flatbed scanner. Using that scanner allows me to leave the glued photos undisturbed on the pages and zoom in on one at a time. Any photos that I can remove easily I'll scan using my Flip-Pal Mobile Scanner

as that is quick and easy and does a very nice job.

Here is page 2 in the album. I can see where a fifth photo was originally glued in but it is missing.

A close look at the bottom three photos reveals that my Uncle Ern (my grandmother's brother) is in the middle photo. Uncle Ern was Doris' father and he was a soldier in the British Army and then the Canadian Army during WW1. 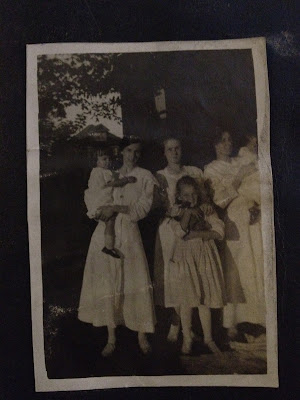 My grandmother is in the photo on the right. It was taken ca 1916. Grandma is the woman on the left holding the toddler who I can see is my Aunt Lily.  I am not sure about the other people in the photos.

I'm quite sure a military historian would be fascinated by the military photos within and I'll be posting them as I go through the album. There are other items of general interest - the cars, the clothing, and so on. And who knows, perhaps a reader will recognize a face! 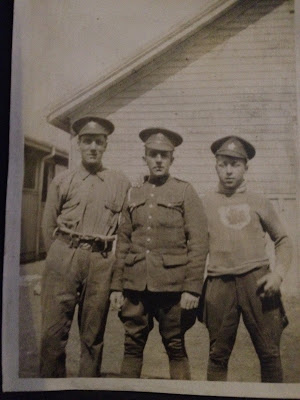 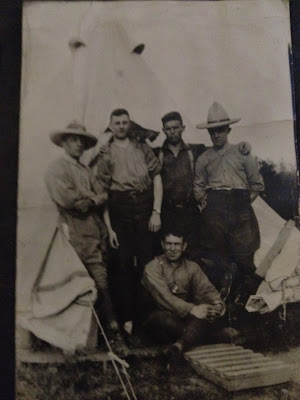 The soldier standing to the left in front of the tent with four other soldiers is my Uncle Ern. He, and the soldier on the far right, are both in a Cavalry unit.

This appears to be a training area (the tents in the photo were never used on the battlefield), possibly Base Borden near Barrie Ontario. More research is required and my husband is happy to tackle that task. He's a Canadian WW1 historian and collector and has many resources he can use to determine locations, units and more precise dates. Luckily I also have Ern's military records and all his paybooks etc so I may be able to determine where he was each year.

I'm not sure who the three Canadian soldiers are in the photo on the left. It's possible the soldier in the middle is Ern, in fact I think it is, but I need to scan and enlarge the photo for a better look. The man in the middle is in the Cavalry which is where my Uncle Ern was at one point. The man on the right is also in a Cavalry unit. It's the pants that are wider in the hips that give the clue for the Cavalry determination.

I can hardly wait to put the rest of the photos in this lovely album online. But I have to remind myself to go slow, take my time and don't get overwhelmed by the task at hand.
at September 18, 2012

A treasure in a plastic tub.

I absolutely understand your mild sense of overwhelm, Lorine. I'm inventorying and researching my greatgrandfather's Souvenirs Album, started in the mid-1850s and including earlier items from his father. And I'm posting the pages, huge over-size page by page, on its own blog (Terwilliger Souvenir Album).
I have to keep remembering, there's no actual rush, and it will be completed, eventually! It is definitely a challenge, and also a treasure - both. Cheers!

Celia - wow! I just took a quick look at the calling cards you posted from your Terwilliger album. Amazing! I've never seen such a collection.

And all the other goodies in that album are incredible. Lucky you but how overwhelming too! Here's a link to your album so others can have a look

Wow, between you and Celia there is so much stuff! I'm also going through boxes and boxes of my grandparents' things, a project that will take me years. Here's a link to the first step of my journey. http://who-knew-it.blogspot.com/2012/04/oh-boy-oh-boy-oh-boy.html

Wow, between you and Celia you have so much stuff! I'm currently going through boxes and boxes of stuff from my grandparents, a project that will surely take me years. I have photos, albums, scrapbooks, newspaper clippings... here is a link to my first step in my journey.

A msot wonderful treasure. I look forward to hearing more about them.

A magnificent treasure Lorine! Take your time making an inventory. However, I have a similar job to do with letters written to my Mum some 70 years ago. But I am in a bit of a hurry as she is still with us. So I can still ask her questions. Maybe there are people around able to answer questions that you may have. In that case you may have to speed up things as well...

I too am faced with a massive undertaking of photographic mayhem needing to be sorted, labeled, organized, etc. I am also working on this same time frame to start, early 1900's. Some of it is also military, a mini treasure trove of my great uncles' service as a Naval Aviator. On the back of one of the photos I have, someone has written Doris on it several times. There appear to be several that have been ripped out of a scrapbook that had black pages. The box I am starting with is about 11x14x6 and it is exploding full of loose photos and newspaper clippings. I've barley scratched the surface, and already I'm finding out all kinds of fun things. Enjoy the journey through history! I know I am.

There are websites which offer scanning and digitizing photos and/or negatives. I did this with all my old negatives and the result was wonderful. And the cost is not prohibitive to anyone. You'll love the results and then you can label and categorize with sub-folders on your computer but be certain to back them up on disks, external hard drive or something else and put it in your bank safe deposit box or fire-proof box at home.