Problems With 1921 Census Indexing & How To Work Around Them 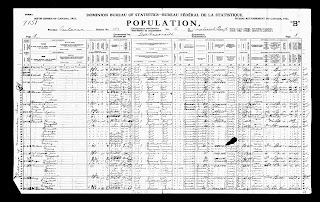 Yesterday saw me playing in the 1921 Canadian Census which is fully indexed and online at Ancestry.ca

I encountered a lot of bad transcribing which of course impacts on our ability to find our ancestors. From talking to other researchers yesterday I know many genealogists were finding errors that made it very challenging to find an ancestor.

I'm still happy that the index is online and I'm really pleased that Ancestry has a way for researchers to add corrections. In fact I spent a lot of time yesterday adding my corrections to a lot of McGinnis and Vollick individuals in the 1921 census.

Correcting Errors on the 1921 Census

To add your correction when you find a badly mangled ancestor's name, just look on the left side of the Ancestry page under the topic "Page Tools" . Under that topic title are  choices:

You want View/Add Alternate Info. Then just follow instructions to add your correction.

Some Errors I Found & How to Work Around Them

Let me give you a few examples and then walk you through how to get around this problem.

My grandmother Olive McGinnis was found as Clive. Not a big deal IF I only searched on her last name. Everyone in the family had some error in their name. The census images confirm that they were mistranscribed

Edgarton Anson Vollick was found as Edward W. Vollick. His son Harry Leslie Vollick, living with him, was indexed as Mary Lester Vollick. His daughter Lottie May was mistranscribed as Satter Mary. A huge error!

WIldcards are your friend. But sometimes they don't work to overcome such things as "Harry" becoming "Mary"

Or Edgarton becoming Edward. You must use 3 letters with the allowed wildcard search so you would have to be very creative and use Ed*r* to pick up both Edgarton and Edward but who would think to do that?

My grandfather's brother, Henry McGinnis, was quite a challenge. It took me over an hour of fiddling and trying different searches to find him. He was badly mistranscribed as "Mary McGinne"   So even with my standard wildcard search of Mc*g*n*s for McGinnis he was not turning up. I confess it did not occur to me to leave off that last letter of "s"!

I have another "trick" i use which is to just search under a first name and a date of birth or a location. But searching for "Henry" and his year of birth +/- 5 AND Guelph which is where he lived, still didn't pick him up (because he was indexed as Mary!)

I changed "Guelph" to "Wellington" in case he'd moved and I didn't know. No luck of course because no matter how broad I made my search I was still using Mc*G*n*s for the last name. (Note to self: Get even more creative in wildcard searches and use something like
Mc*G*n* or even Mc*G* when experiencing difficulty finding someone I know is there!)

I changed "Wellington" to "Ontario" since I knew for sure he lived in Ontario in 1921. But these standard changes to a broader search did not help. (Again because of the incorrect first name)

Searching only under his last name and year of birth +/- 5 also did nothing because I used my standard Mc*G*n*s as the last name.

I tried his wife Eunice - using wildcards - but no luck. I tried each of his children in turn. Nothing until I got to his youngest son Russell. Searching for "Rus*" with no last name and just his year of birth +/-5 was a Bingo moment. There they were - in Guelph, Wellington County as I knew they would be - but indexed as McGinne with Henry being Mary, his wife Eunice being Cunice and his children unrecognizable.... except for Russell.

I still haven't found my great grandmother Harriet (Hattie) McGinnis. I know she lived in Guelph. I know when she was born (1847). I've followed my own tips and still she hasn't popped up. I even tried searching under her maiden name of King in case she used that. Nada.

I tried lots of variations of her surname and even searched just under her first name but still nothing.

So today I am going to search each of her children in turn to see if she was living with a married daughter and perhaps written incorrectly under their married surname. I'm also going to try Mattie as a first name in case the "H" was mistaken for an "M"

Some great tips, Lorine,thanks for sharing them. I was eagerly awaiting 1921 to find some family members who moved from North Battleford, Saskatchewan to Vancouver sometime after 1916. I was prepared to browse North Battleford, but there was no way I was going to tackle Vancouver without an index! Fortunately the names were Collins and Peeebles, and I found them easily, but I spotted and unrelated Patrick Collins whose wife was 'Ratherine'. I did the decent thing and submitted a correction so that the descendants of Patrick and Catherine Collins of Ontario will be able to find them one day. And yes, of course I checked the image first!

I found my people because I knew where they lived; however, the index was "wrong" so that they could not be found by using the index. In this case, the transcriber had correctly transcribed what the census-taker had written, but that was an incorrect spelling. Can indexes handle cases where the census spelling is incorrect?

Took me forever to find my grandma!
They had her listed as Pent instead of Pearl which may have made sense but by looking at the record you can clearly read what it says.
Whoever was adding the info must have been in a rush from all the errors.

Lorine, I've found that I can now make a correction simply by double-clicking the name in the index.

To Craig - yes, you can post a correction even if it was the enumerator that put it down wrong. There is an option for putting "incorrect in original" as the reason for your correction.

Thanks for the reminder to add corrections in Ancestry. I must go back and do that.

I had a heck of a time finding my Bertolo ancestors and I can't blame the transcribers. One family certainly looks like Borthillo. And my grandfather and his brother were enumerated as Bertand in two separate abodes. Bertrand's from Italy. Go figure!

I also underestamated the extent to which my Italian family had integrated. Nearly everyone was given an English name. Even Maria became Mary.

Corrections can also help Ancestry give you hints of possible other records that might be related. It won't work immediately but hopefully in a few days they will update their indexes and you can see if the system has accepted your suggestions.

This has brought back memories of how frustrating it was to find ancestors in the 1921 census. Then they were indexed the method used to 'read. the census in Quebec or wherever the census was in French, understood Mlle and Mme to be the given name. There were pages and pages like that. I spent time sending correction after correction into Ancestry. Then and this was not the fault of Ancestry, those were the first census my mother would have been on, I said would have because the block of the street she and her family lived, was completely missed by an enumerator . Check three times for the block and had a friend check as well, a disappointment that was.