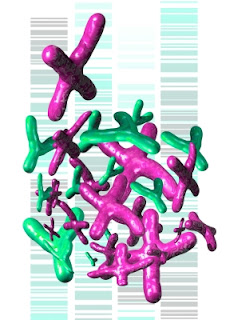 That's a British expression. It means dumbfounded, surprised as heck... you get the idea. I've been digging into hubs' DNA matches and results very closely and found a match that is one heck of a surprise.

The matches that I've been able to confirm as matching me or my brother, are with a shared ancestor going back to 4th or 6th great grandparent - and they only have 20-25 cM matching. So finding this new match to hubs and such a close match was exciting.

The puzzler was that none of the match's surnames or ancestral tree are the same as my husband's. And we can both go back quite far with sources to prove the genealogy. So what gives? After scratching my head for a bit I had an "aha" moment.

I suddenly realized that one of the match's surnames was the same as the name bandied about as a bit of family lore from hubs' grandmother. Grandmother always claimed that her husband was the son of the hired man and not the son of the man he thought was his father, his mother's husband. We dismissed this as petty gossip on her part.

But now, having seen the lineage and done my own investigation, we have a compelling case that supports her claim. I don't want to use names yet so I'm going to make up names for each individual.

Great grandmother Sally came from England in 1913 to live with her brother Jim. Jim lived next door to Calvin Smith. (the grandfather of our match )

Great Sally was said to have had hub's grandpa (Alex) by the hired man (Mr. Smith) who was not her husband.

We also find that Sally's husband William was living next door to Ralph Smith and two sons in 1911. They were all farmers.

Ralph Smith and his sons were all farmers and farm hands. This fits with the story of Great Grandma Sally messing around with the hired man.

Given the presumed close relationship indicated by the DNA samples, we have a theory that either Man B (our match's grandpa) or one of his nephews (we have a good candidate) was the father of hubs' Grandpa.

Now the question is how do we tactfully suggest this to our  match (or do we even bring it up??) and how do we gather more evidence.

We plan on asking hubs' mother to have her DNA tested through 23andMe.com

so we can see if she also matches hubs' match John, and if so, by how much.

We will also ask hubs' father to take a DNA test so we can see if he matches the same person as hubs'. One of them should match, the other should not. If it is hubs' mother who matches, that would fit the correct lineage. (maternal not paternal)

Hubs is going to join some surname groups for the lineage he thought was his. If he is not related he won't match anyone in those groups.

The new match's ancestors were all running around in the same very small community as hubs' ancestors. So there is a chance that the common ancestor is a secret that a wife or mother took to the grave. We would have to test more family members to try to narrow down the shared ancestor.

We'd like to get one of hubs' uncles to submit a DNA test if possible.

Meantime I'm doing some sleuthing to try to eliminate any possibility that there is a different shared surname and thus ancestor. But it certainly looks like hubs has a new cousin and many new family surnames to research! Mind you this is only in the theory stage, there is no definite proof of what the relationship is to our new-found match.

FN1: cM  is  unit of genetic distance on a chromosome. Closer relationships have longer cMs because recombination has not occurred as often.
at October 20, 2013

If you hadn't had the family gossip about the farm hand, would have you considered the alternative that Man C (or a close relative) was the connection between your husband and the new-found match? Can that possibility be excluded?

I don't know much about genealogy DNA testing but have thought about it a lot- no research yet. I am an only child so no sibs, mother passed this year, last of the family. Father's sibs all gone but there are some of his half nephews but dad's maternal side. Could you recommend a good simple site to explain what I can do? I see that they are now testing the female side but how would this be co-oberated? I have two sons and one daughter. The sons have different fathers. Thanks

Your plan is a good one, but if you are primarily interested in determining if "ManB" is your husband's biological great-grandfather, testing one of your husbands uncles should give that answer. Good Luck!

Hi Lorine,
Love to see blogs about DNA!
I am a little confused about the percentage shared between you and this match. Are you sure that it isn't .64 percent instead of 64 percent? A brother and sister would share on average 50 percent of their DNA. The only other relationship that would share this amount (or close to it) would be a parent/child. A half second cousin would share around 1.56 percent of their DNA, but .64 percent. would fall within the acceptable range.

Oh My.
Your experience highlights exactly why to record idle "gossip" or speculation somewhere (definitely not on an official or online tree) so that the information is available when other information appears.
Our ancestors lived real, not pristine, lives.

What a great challenge for you. Please keep us posted.

Wow! That's pretty cool that you now have something to back up the family story.

Do you mean .64%?
Its a great thing that theses tests are so cheap now, makes it feasible to solve brick walls.

Olive Tree Genealogy said...
This comment has been removed by the author.
10:22 AM

Bgwiehle, not sure what you meant with your question but what I've done is compare hubs' researched genealogy (which I did) with his new found match's genealogy (sent by the match and verified by me yesterday)

Angie - thanks for your input, you are quite right. We cannot get hubs' uncles to test as the family story is a little complex. hubs' grandpa was married to two women at the same time - one in England, one in Canada. Except the English wife wasn't a legit marriage (altho she thought it was) because Grandpa had a pal pretend to be a minister and "marry" them....

So the English kids didn't know about hubs' mom (the only child from the Canada wife) until grandpa died. Let's just say they polite but not receptive to any future meetings or family happy times! So we have no idea where they live and we also rather doubt they would welcome hearing from us.

We have been thinking about who else we could ask to be tested which would assist in our detective work..

Thanks for sharing. I am working on a similar mystery, however I do not have a family story that supports my theory. Looks like a good plan. Keep us posted.

I want to let you know that two of your blog posts are listed in today's Fab Finds post at http://janasgenealogyandfamilyhistory.blogspot.com/2013/10/follow-friday-fab-finds-for-october-25.html

Thanks Jana! I appreciate that

Good morning, Jana. Last evening I joined a Facebook group, and you asked me to look at this blog site. Very interesting! I submitted and received results that came back with fourteen pages of matches who all seem to be related, including second and third cousins. My question was whether I could trust the results, and how to identify my own father. There is some good information here. I guess I would have to say this process also leaves me Gob-Smacked, if I have found my family.My scientific mind needs proof. :)

How do I email you privately? Pretty sure I am also Alex's granddaughter by the sounds of it.

Anonymous - you can reach me at olivetreegenealogy AT gmail.com

Replace the AT with @

A fascinating post Lorine...we don't leap to the thought there's an anomaly in our findings unless there's a clear research trail as you have here. Perhaps we should trust our ancestors less? ;)

Wondering why everyone seems to leap to the conclusion that grandma was fooling around... when it is also possible that the farm hand nailed her in the hayloft or some such scenario, without her consent...

Nancy - what led us to this conclusion was that my husband's grandmother, who knew Elsie, was one of many in that small town who whispered about the "affair" Elsie was having with the hired man.

Not jumping, just believing what was always said.