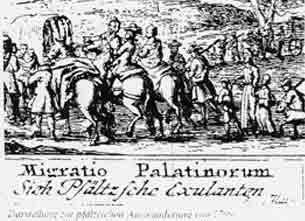 My 8th great-grandmother Anna Kuhn was born in Germany about 1659. I'm writing about Anna as part of Amy Crow's Challenge: 52 Ancestors in 52 Weeks and also as part of Women's History Month Challenge.

In 1674, at the age of 15, she was married to Jorg Bruning at Huttengesas, Germany. Jorg Bruning was a much older man, and the marriage was a most unhappy one for poor Anna.

It was considered such scandalous behaviour to run off with another man while married to someone else and have an illegitimate child that the minister in the church entered this in the church books:

"Nicolaus Bellinger and Anna, daughter of Hans Kuhn, were married 25 November 1685 as per the order of the noble government. She had md. some years ago Jorg Bruning at Huttengesab, but she was not compatible with him, so Bruning went from her and she from him. She went away with this Nicolaus Bellinger and had an illegitimate child - a little son,  so that the aforementioned Jorg Bruning has contracted another marriage.

After all this however, the above mentioned Bellinger has remained as a stranger. She sent a request to the honourable government to let them stay in the country, and this finally has been permitted by the aforementioned honourable government which ordered me to marry them with prior published penitence and to avoid further trouble and also to legitimize the rearing of this blameless child"

In 1710 the Bellinger family joined with other Palatine refugees coming to New York. There were 3 000 Palatines on 10 ships that sailed for New York and approximately 470 died on the voyage or shortly after their arrival.  I've always felt sorry for poor Anna married at 15 to someone she didn't love. I really can't blame her for running away to find happiness. But she suffered greatly, as did all the Palatines. First persecuted in their own country because of their religion and then treated as indentured servants by the British.

Another strong female ancestor for me!

That is quite a story! Thank goodness for the minister who felt the need to explain the background behind the marriage. There are multiple instances in my research where a little note in the margins of a church book could have REALLY helped! :) Thanks for sharing!

An interesting woman. Expository notes amongst the routine records can be gems.
Do you have the original German text somewhere? I would like to check the translation; especially the word "stranger" in the 2nd paragraph. The quoted text has "Huttengesab" but the the proper placename spelling is Hüttengesäß.
I found your page for Nicholas Bellinger, which mentions that entry is from the church in Langenselbold [http://www.olivetreegenealogy.com/pal/surnames/nicholas-bellinger.shtml ]. (That page also uses a b instead of the sz ligature (ß) in "Steinau an der Strabe" as well as "Huttengesab").
You mentioned religious persecution, implying the Bellingers were Protestant in 1710; was Langenselbold a Catholic or Lutheran parish in 1685?
The emigrating Germans are generally called Palatines because supposedly the majority were from the Pfalz. However, Hüttengesäß, Langenselbold and Steinau are in Hesse. Frankfurt, also in Hesse, is mentioned as an originating region in the article "German Palatines" [http://en.wikipedia.org/wiki/German_Palatines ]. Is there an estimate of the number of Hessians included in the Palatine emigration?

I enjoyed you story. Yes, it was great the priest felt the need to explain the marriage. I love when they do that. My husbands family left Germany in 1848 and I know that because of the note the priest wrote in the parish records.

What an amazing story!