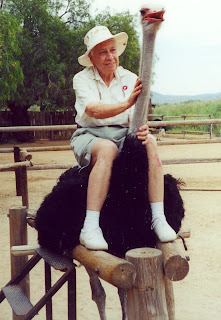 Join us for Sharing Memories - A Genealogy Journey We focus on memories of our parents, grandparents and others. We write for our children and grandchildren, that the memories are not lost over time. I hope you are keeping a journal, whether it is private or public, and joining us as we write our memoirs.

My mother was a character. She wasn't a warm fuzzy mother but she was into living life to the fullest.  She was fiercely independent and proud and she taught me that you should not depend on others to take care of you. You must be self-sufficient in all ways, and make your own way in the world.


A tiny woman, only 5'2" tall, she made up for her lack of height with a feisty attitude. No one would force Mom to back down! When she was in her mid 50s she decided to retire, sell all her possessions, buy a Winnebago and travel. She convinced her mother (in her 70s) and older sister to go with her.

Mom took a mechanics course to learn how to fix the car they towed behind them.  They traveled all over N. America and Mexico for many years. Mom did all the driving, Lily (her sister) did the cooking and cleaning. They were even written about twice in Motor Home Magazines!

When mother was 80 she decided to hike through Australia with nothing but a pink Barbie backpack. She wanted a hot air balloon ride for her 80th birthday and was determined to do it in Australia. So off she went! On her own.

That was the start of 10 years of constant travel. Every year she took one major trip - to S. Africa, to Russia, to China, New Zealand, back to Australia, to Denmark, Sweden, Finland and many other places. In between her big trips she took what she called "little jaunts" - to England, New York, British Columbia, Nova Scotia, Alaska... I can't remember everywhere she went, it seemed she was always off somewhere.

She usually went alone, sometimes she booked a tour, but S. Africa she did on her own which was very worrisome to me. Her last big trip was around age 90 when she and her younger sister went camping in the Australian outback for 2 weeks. Everyone in the group was in their 30s except Mom and her sister.

At age 60 she learned to fly an airplane and was within a few hours of getting her pilot's license when she stopped the lessons. I don't know why, Mom would never let on she couldn't do something, but she might have quit simply because she only took the lessons so she could fly the ultralight that she and her companion were building!

In her 70s she moved to British Columbia with her companion and they began going on little impulsive adventures. She phoned me once from a highway en route to Alaska. She and Godfrey (her companion) had decided on the spur of the moment to take a pup tent and go to Alaska so off they went.

Another time she phoned from somewhere on the West coast of America, saying she was on her way to the Rose Bowl Parade. She and Godfrey had gone to Tim Horton's for a coffee and over coffee decided to get in the truck and start driving until they reached California. They didn't even go home to pack a toothbrush or clothes, they left from the Coffee Shop.

When she would visit me at my home she'd bring a tent and pitch it in my backyard. I was horrified the first time that happened, and begged her to come inside and sleep in my guest room. She refused, saying she preferred to sleep under the stars. I was very upset and told her the neighbours would think I was a horrible daughter. She smiled, patted my hand and said "Dear, just let me do my own thing"

And that was my mother - doing her own thing until her death at age 93. A character who led an active, full and interesting life!

Ohmygoodness, I feel so very boring and pedestrian as a mother, after reading this, Lorine! What a fascinating life she led, right up to the end, eh?!

What an amazing Mum! Loved this story

Wow, I'd love to be that active and energetic at 80 and 90. Remarkable woman.

Virginia, I'd love to have HALF that energy now! LOL and I'm nowhere near 80.

For "bothered" read "Irriated/annoyed" She was a character and an inspiration but she had zero empathy for others.

Diane - Yes she did so much but I regret that she would not share her insights or impressions of her travels with us.

Celia - Yep I know what you mean! I could never keep up with her :-)

It sounds like your mother was determined to live her life to the fullest. What that means depends on the person. She lived with passion, and that's how life should be. She may also have hoped that a visceral awareness of how life could be would miraculously cure your health issues so you could live a life similar in style. That's unrealistic, but a person who has no health issues often can't see that. We each have our own perks. There's a lot to be said for sharing stories and taking care of loved ones. Some people are nurturing and others not. My mother was also not a warm and fuzzy woman--but I think that was more from the necessity--being a divorcee raising 4 girls alone with no financial support other than what she earned. She died young and didn't have a very good life. She was very empathetic, but she always said life isn't fair, it just is, and you have to make the best of it. She expected you to be strong and had little patience for weakness. It was the whole stiff upper lip thing. Just be glad your mom was lucky enough to be healthy enough to lead a fulfilling life. I think, as you age, you just gotta do what makes you happy, hopefully at not too much cost to your loved ones. Life only comes around once. When I break up with men, it's often been a slow process of making mental notes of what I'd be doing if I wasn't in that relationship. When the break actually comes, I usually start working on fulfilling my list. It sounds like your mother had an awesome list. Life often kills spontaneity, and she was obviously determined not to let it die.

Hi Unknown (I wish I knew your name)

- You have a great positive outlook on life! I am so pleased you shared that with me.

You're right about my mother wanting to live life to the fullest. She was not a shrinking violet by any means.

Grandma sure was an adventurer! I think she did pass down some of her traits to not only her daughters, but her granddaughters too.