In-depth Review of a Record Leads to a Genealogy Solution! 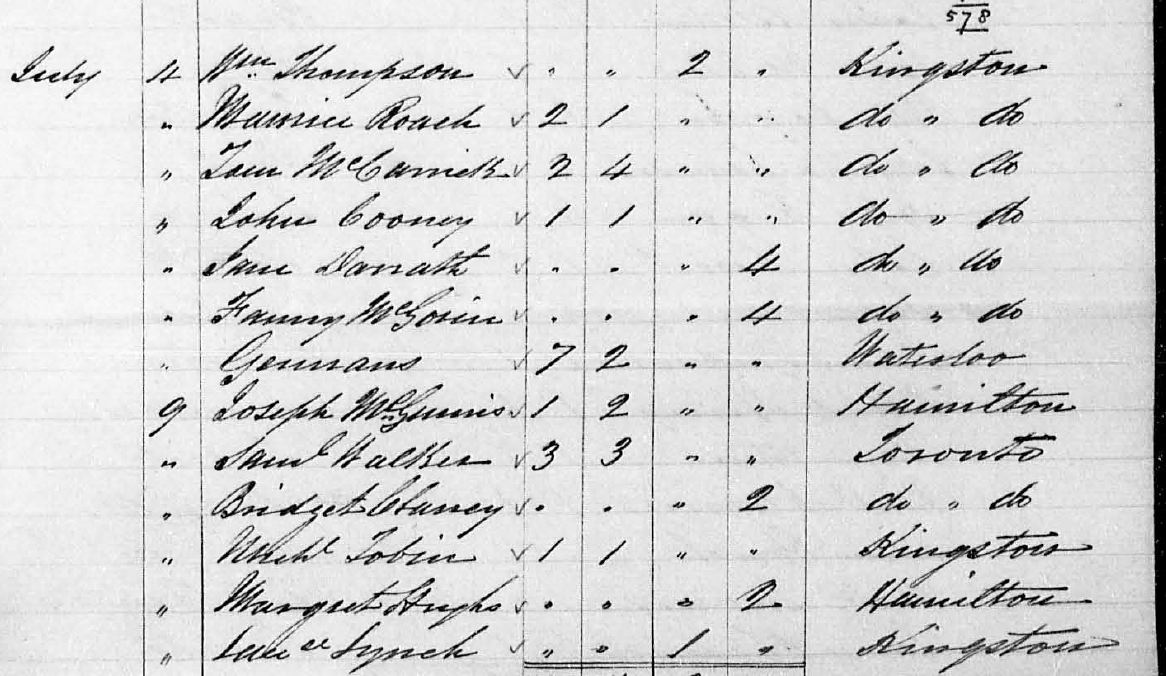 Several years ago I sent for a transcribed record. It was for a Joseph McGinnis who was being sent from Montreal to Hamilton in July 1846. I hoped it was my ancestor who I knew had arrived from Ireland in Upper Canada (Ontario) between January 1846 and  September 1847. Since ships passenger lists to Canada did not have to be kept before 1865, trying to find an ancestor's arrival is challenging.

However I was disappointed because the abstract recorded Joseph with two adult females and no children. Since I knew that Joseph and his wife Fanny came during the Irish famine with a daughter under the age of 1, this record could not be the right family.

I didn't have access to the original record so I set the record aside but didn't discard the idea completely that somehow it might be my Joseph. Perhaps the record was in error and should have read Joseph and 1 adult female and 1 child? That was my rather vague hope. With the record tucked away I moved on to other research but it was always in the back of my mind.

This year I had a chance to view the actual image of the record set that contained Joseph's name. To my disappoinment, the page definitely showed Joseph and 2 Adult women being sent on to Hamilton at the Government's expense.

I decided to study the document carefully. My first puzzle was the ditto marks (") in several of the columns. If I followed up to where the ditto marks began on Joseph's page, it seemed to indicate that the numbers in the 4 columns were: 1, 2, 2, 4. There were no column headings on the page with Joseph's name but the most logical thing would be if those columns showed Adult males, adult females and perhaps male and female children.if so, this was most definitely not my Joseph.

So off I went to find the first page of this record set. What I found confused me even more because the 4 column headings were: Adults M (male), Adults F (female), Male Adults, Female Adults.

Why would the clerk record adults twice? That made no sense. Because it made no sense I knew that there had to be a logical explanation. Perhaps the description of this record set would help.

Before I tried to find the description I had another puzzle to solve. Some of the numbers were written in the first set of 2 columns, but some were in the second set. They were never in both.

I knew I need to scroll back through the microfilm until I found page 1.

And there it was - the answer to my question. Reading very carefully and thinking about this description, the answer became clear. It was in the phrase  "shewing [showing] the adult persons single or in families..." Aha! The clerk needed to differentiate between married and single individuals. The columns were obviously for married adult men, married adult women, single men and single women!

But what about those ditto marks? A careful look at  the whole page showed that they could not be ditto marks because the totals added at the bottom would not work out. Those totals only worked by adding the actual numbers in each column and ignoring the ditto marks.

It was pretty obvious now that what I thought were ditto marks (") were something else. And in fact a better look at the very last column for destination showed that the clerk used "do" for "ditto". Those marks (") meant zero, that is, no number in that column.

And then came the biggest AHA! moment of all! This record set only recorded the numbers of adults traveling westward! It did not record numbers of children in the family.

Going back to Joseph McGinnis and his record I took another look. A theory was popping into my head and I wanted to be sure I understood his record before formulating it aloud.

The original abstracted transcript I had received several years before was correct. Joseph McGinnis and 2 adult females were being sent on from Montreal to Hamilton on July 9th 1846. But the very important fact that had not been sent with the transcript was that the number of children in families were not recorded!

This could easily be my Joseph with his wife Fanny and baby daughter Bridget. As for the second adult female, I have a very good possibility for that woman. Joseph's brother Daniel married a woman named Margaret Downey in Upper Canada in late 1846 or early 1847. My Joseph McGinnis' wife was Fanny Downey. I have always theorized that Margaret and Fanny were sisters but have not yet been able to prove or disprove this theory.

If I go with this theory then  there is a very good possibility that the adult female travelling with them was Fanny's sister Margaret.

The last clincher is the fact that my McGinnis family had strong ties with the Hamilton community. As well that would be the only way to get to the Guelph area in 1846 - by taking a steamer west to Hamilton or going by land, and then taking the only road north which was between Hamilton and Guelph.

Thus it makes sense that Joseph would be sent to Hamilton and from there he would have to arrange a cart or coach to continue on to the Guelph area.

I believe this is quite likely a record of my Irish ancestor's arrival from Ireland at the height of the Irish Famine. I will of course continue to research my theory by  looking for other records to support or disprove it.

What did I learn from this?

1. Always try to find the original, unaltered record
2. Study the original record. Analyze it. Question it.
3. Study the record again. Make sure you completely understand how it was recorded and why it was recorded.
4. Develop a theory based on that record and seek evidence to prove or disprove your theory
5. Never give up - pull out records you found years ago and go through them again.

Brilliant advice and examples! Thanks for sharing.

Great research, and great advice! Thanks for sharing.

Nothing beats being able to see and analyze an original record. Well done, Lorine!

Thank you for that necessary reminder. I had a similar discovery last year that led to an amazing discovery- I had a transcription of my 3 x ggrandfather's baptism along with 2 of his brothers that had them being baptized in their home parish of Bowmore Scotland in 1818. I had never questioned this but when I located the original document on Scotland's People I discovered that he was actually baptized in 1814, in Hudson's Bay British North America! His brothers had also been baptized there on different occasions and all 3 baptisms were entered into the parish records on the family's return to Scotland in Nov of 1818. If I hadn't seen the original, I would never have known to golooking for this family in the records of the Selkirk settlement at Red River!

A different time, more experience, a positive frame of mind and excellent analysis of the document all came together to provide a solid conclusion. Fantastic.

A wonderful bit of detective work! I recently got an email from a state archives saying a man I was asking about was serving time for "assault to rape." Well, I ordered the record & was kind of sick about the whole thing. I received it and, it wasn't my ancestor! But, furthermore, he was in for PERJURY, not rape!!! I don't even see a 'rape' on the page so I'm not sure where it came from, but it was truly a mistake that could have been handed down!

Could you be more specific about where you sent for a transcription and where you found the original record? I also had Irish family arriving in Canada around the time of the Famine, but was unaware there were any records that would give evidence of their arrival. Thanks!

Hi genealojist - if you can wait just a wee bit longer, I am writing an ebook which is all about the records for immigration to Canada before 185.

I promise you won't be disappointed in it! I will have it published this month.

As for the original transcript, the site that had these has long gone out of business. But not to despair as my ebook will provide another spot to obtain this data

Thank you Judy, Amy and Yvonne for your kind words! I only wish I had time to go over all my older findings and hunt for originals

Charlie, you summed it up so well, thank you!

CallieK - that is fantastic, what a great story and perfect example of why we should always try our best to get the original. btw in my upcoming ebook on Immigration to Canada before 1865 I including some details of that Selkirk Settlement at Red River

Enthusiastic Genealogist That's dreadful! I wonder if you can get that label corrected so that descendants of that person aren't left thinking the wrong thing?