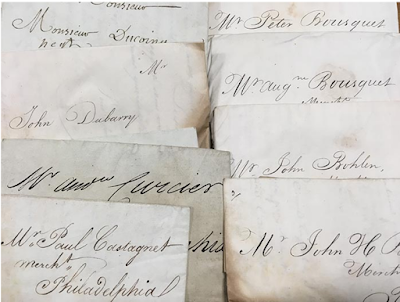 This is a very cool database project that is beginning. The Prize Papers Project, consists of approximately 160,000 undelivered letters seized from ships captured by the British in the wars of the 17th to the 19th centuries. The letters, many unopened, were still in their mail bags headed for delivery.

Most of the collection consists of items (letters, jewellry, locks of hair etc) tucked into envelopes and sent from 1652 to 1815.

What Do the Prize Papers Consist of?

Professor Dagmar Freist of The University of Oldenburg in Germany will work with The National Archives in opening up the HCA 30 (This series consists of miscellaneous Admiralty papers from the High Court of Admiralty, and the Supreme Court of Judicature, High Court of Justice, Probate, Divorce and Admiralty Division) and HCA 32 series (This series consists of papers relating to cases concerning ships captured as prize in time of war. Although the papers cover the period 1592 to 1855, the core dates of the bulk of the papers are 1655 to 1817) for further research and discovery.

But don't get too excited just yet - this is a 20 year project set to begin May 2018! I'm kind of hoping for a letter from or to my husband's ancestor Thomas Montgomery who was sailing on a ship from England to New York when the ship was captured. The vessel he was on reached the coast of Newfoundland, where it was taken in charge by a British man-of-war, and all on board were made prisoners of war and taken to St. Johns, where they were detained four weeks. Perhaps there were letters - I can always hope.