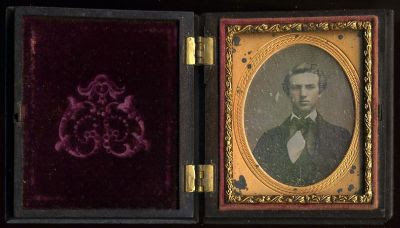 As many of my readers know, I'm an avid collector of 19th century photographs. My website Lost Faces has published images of my collection of daguerreotypes and ambrotypes, as well as the cartes de visite and cabinet cards that I rescue from antique stores and flea markets.

Many times I pass on purchasing an old photo because it is so badly damaged it is almost unrecognizable. But that might change!

A team of scientists led by Western University in London Ontario learned how to use light to see through degradation in daguerreotypes, a form of photography popular in the early 1800s. Daguerreotypes came into being in 1839 and were the earliest type of photography.

The team of scientists used two daguerreotypes from the 1850s that were damaged beyond recognition of the subjects. They could see one was a woman, the other a man but no details were visible.

Lorine,
This is amazing indeed! So many old daguerreotypes might be recoverable with this method, which is very exciting. I have in my collection of family pictures one which is either a daguerreotype or a tintype. How do you tell the difference? It's about 2" by 3" and definitely metal, not in a frame. Another is in a frame with a cover, and looks much like the one of the ghostly woman whose image was recovered. The difference is that in my case, the image of a young couple is very clear. The clasp on the frame is still intact, so air didn't get to it. Is that why the image is still so clear? My problem is that in neither case do I have any idea who the people are. They must be family or friends of family. Were I to scan them and send them to you to put on your lost images website, can I hope someone might identify them for me??? I do have in a family album a picture of the first wife of my gg grandfather. The couple went to Liberia as missionaries in the summer of 1849, and I assume the picture was taken before they left. I don't have a corresponding picture of him at about the right age. She died there in March 1850, which, along with the style of clothes, brackets the date of the picture. I have pictures of my gg grandparents taken many years later, glued into the album.

Thanks so much for your blog and all your other work!
Doris

Doris - the easiest way to tell if a photo is a daguerreotype is to turn it at different angles. It will act like a mirror when viewed in some ways, and the image will "disappear". Also they were always in cases for protection.

You may enjoy my video tutorial explaining and showing various types of early photos. http://www.lostfaces.com/video-tutorial.html