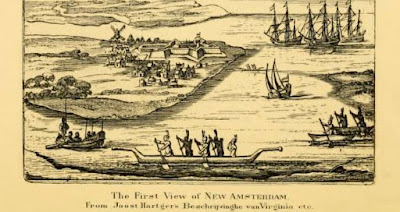 It recently came to my attention that there was a glitch preventing members from posting in some of my Facebook Genealogy groups. I've fixed the problem so if you are a member of any of the groups below, please go back and share your genealogy with us!

Van Alstyne Genealogy
Jan Martense de Wever [the weaver] was the immigrant ancestor of the Van  Alstyne family in America. He and his wife, Dircken Hermanse Boertgen and at least two children came to New York area from Drenthe Province, Netherlands prior to 1655.

Descendants of Adriaen Crijnen Post
The Dutchman Adriaen Crijnen Post and his wife Claartje (Clara) Moockers are found in Recife Brazil in 1646. By the time Brazil fell to the Portuguese in 1654 Adriaen and his femily had left for the Netherlands. From there they sailed to New Netherland.

Goeway Genealogy
This group focuses on Ancestors & Descendants of Salomon Abbelse & Barber Philippse. The story of the Goeway family in New Netherland begins with Salomon Abelse who was baptised in Amsterdam Holland in 1617, and his wife Barber (Barbara) Phillipse who was baptised in 1619 in Amsterdam. Salomon and Barber left Holland for New Netherland with their children circa 1652, settling in New Amsterdam (present day New York City)

Van Slyke Genealogy
For anyone interested in the genealogy of Cornelis Antonissen Van Slyke and his nephew Willem Pieterse Van Slyke aka Neef. Both settled in New Netherland (New York) in the 1600s.

Straetsman Genealogy
The Straetsman sisters Barentje and Teuntje were from Culemborg Netherlands. In 1630 the West India Company conquered part of Brazil and the colony of New Holland (now present-day Recife) was founded. Dutch troops were sent to Recife and Olinda in Pernambuco Brazil and no doubt Barentje and Teuntje’s first husbands were among those sent to maintain order. They settled first in Brazil before 1637 and then New Netherland circa 1657.

Pioneers of Arkell, Wellington County Ontario Canada
In May 1831 a group of Englishmen set out from New York for what would become Arkell Ontario. A list of men in the party includes Thomas and John Arkell, for whom the settlement was named, Lewis King, Thomas King, James Hewer, Frederick Stone, Thomas Stone, John Outin, James Carter, Joseph Dory, Charles Willoughby and Peter Bell.
at May 22, 2020

The best for doing research, helpful hints and posting of records in area you need. If you don't like FB for social contact...join the genealogy groups, you won't regret it.