Here are his records 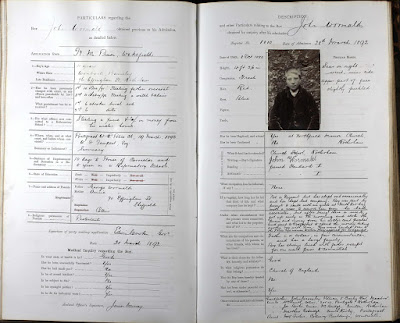 Notes in his record state he spent 5 days in the House of Corrections and 5 years in Reform School for stealing a purse from his uncle's house.  His parents, George and Annie Wormald, my son's great-grandparents, had administered several previous punishments for his misbehaviour. The record shows 2 previous thefts and punishments of a birch rod whipping for each:

John was said to not be a vagrant but he was from a large family and had friends who his parents thought led him astray. In some desperation they sent him to live with an uncle but as you see below, that was not helpful.

While I feel sad for John and his family, the wonderful thing about this set of records is not only the photo of John and details but at the very bottom of the record is a list of several relatives - an aunt, three uncles and his grandfather. This is genealogy gold.

I've tried over the years to find out what happened to little John after he was discharged but with no luck.