O is for Orphans 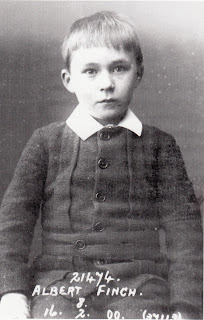 Today's letter is O for Orphans. My husband's great-grandmother Elsie Phyllis Markham was orphaned at the age of 8 months. Her older brothers ages 8 and 2 years old were also orphaned when their parents succumbed to illness in London England in October and November 1898.

The boys were sent to orphanages but Elsie was taken in by relatives, eventually brought to Canada by her brother Albert Finch who had been sent to Canada as a Barnardo Boy in 1901.

Albert was admitted to Barnardos Homes as an orphan on 16 Feb. 1899 age 8 years, 4 months. He spent one night at the Receiving House in Stepney East London and on 17 Feb. 1899 he was transferred to Sheppard House in Bow, East London. On 10 May 1899 Albert was boarded out with foster parents in Romsey Hampshire where he remained for two years before returning to East London to Leopold House on 8 March 1901. On 21 March 1901 he was sent to Canada on the SS Tunisian

Luckily for those with orphans in the family tree, there are many good orphanage records available. We were able to obtain Albert's records from Barnardo's but his brother's records could not be found as he was sent to a different orphanage in England called the Miller Homes. We could not find records for this orphanage.

No child left the Miller Homes until employment had been found for them. The boys were apprenticed to a trade and some with the ability to teacher training. They were always provided with three suits and a sum of money. The girls left at 17 and went into domestic service, nursing or teacher training, they too were provided with an outfit of clothes and some money. George Miller gave his blessing to every child on leaving his care, and gave each a Bible.

As one orphan recalled upon leaving, "My belongings were my Bible, my clothes and half a crown and, best of all, was the priceless blessing of George Miller's prayers."

UPDATE: Many readers have asked what happened to Elsie and her little brother. I am writing their stories today and will publish them here on Olive Tree Genealogy blog in the coming weeks.

I wonder if Albert tried to find his brother and failed. A two year old would have no memory of his family or siblings. Very sad.

You didn't follow Elsie's history. Was she shuffled between homes as her brothers were?
Fascinating to have found all that history!

My great grandmother, Pitranal Zawacki Riemkiewicz arrived in New York for Russia Poland with her three children expecting to meet up with her husband, Bolislaw Riemkiewicz. However, he never showed up and she, greatly expecting had no way to support them. The boys and girl were placed in an orphanage in Clark County, Wisconsin adopted out and never saw their mother again. In the meantime, she gave birth to my grandfather, William, married a man she had met on the ship coming over and had two more children,
I wish it were a happier ending, but she died given birth to the next child, leaving the husband with three young children and one adolescent. The welfare department intervened and placed the children in care. All were separated. I have letters from the department with complaints of abuse. It's very sad.
Janie

For those kind readers asking about Elsie and her little brother Frederick, I have now written two blog posts about them. Elsie will be published August 18th, and Frederick on August 22nd.

Warning: Frederick's story is not a happy one