Relative Race: Amazing Race Meets Who Do You Think You Are 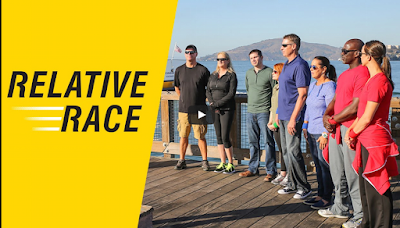 Olive Tree Genealogy received the following announcement about a brand new TV show, an original family history-based competition reality show titled Relative Race, that has been described as Amazing Race meets Who Do You Think You Are.


Premiering on Sunday, February 28 at 8pm ET/6pm MT/5pm PT on BYUtv, Relative Race features four married couples as they travel across the US in search of long lost relatives, armed with only paper maps, a rental car, a $25 per diem and a flip phone.

Using the science and technology provided by Ancestry DNA

, the couples embark on a journey that starts in San Francisco, ends in New York City and leads them to unknown relatives along the way. Cameras follow all four teams as they drive across the country -more than 4500 miles- in just ten days, stopping each day to complete a challenge and find (and stay with) their newly discovered relatives in a different city. At the end of each day, the team that finishes last receives a strike; after three strikes, teams are eliminated and the remaining teams travel to NYC for the grand finale where there is a $25k grand prize for the winning couple.

Email ThisBlogThis!Share to TwitterShare to FacebookShare to Pinterest
Labels: Amazing Race, Ancestry.com, AncestryDNA, Announcements, Press Release, Relative Race, Who Do You Think You Are?

This show has turned out so well! It's three seasons later (since this post) and each season has gotten progressively better! This last season my family and I were absolutely glued -- the relatives the teams were able to meet were just incredible! I can't wait for season four. Here's a review I wrote of Relative Race that talks about why I think the show is so awesome! :)