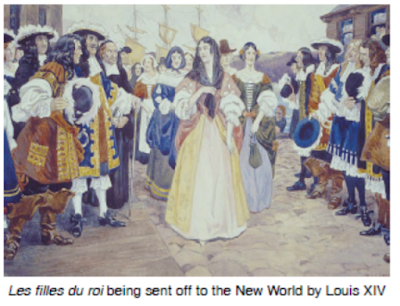 Claude "Blandina" was one of three orphaned sisters who were sent to Canada as a "Filles Du Roi"(King's daughters). The Filles Du Rois were impoverished or oprhan women sent to Canada at royal expense to find husbands and populate the country. She is thought to have been recently arrived in New France (now Quebec) at the time of her marriage because the bishop dispensed with two of the usual three required banns for her marriage to Simeon LeRoy dit Audy (Ody).    Learn about dit names at Oh Those Dit Names! on Legacy Family Tree.

The filles du roi, or King's Daughters, were some 770 women who arrived in the colony of New France (Canada)  between 1663 and 1673, under the financial sponsorship of King Louis XIV of France. Most were single French women  and many were orphans. Their transportation to Canada and settlement in the colony were paid for by the King. Some were given a royal gift of a dowry of 50 livres for their marriage to one of the many unmarried male colonists in Canada.   These gifts are reflected in some of the marriage contracts entered into by the filles du roi at the time of their first  marriages.

The filles du roi were part of King Louis XIV's program to promote the settlement of his colony in Canada. Some 737 of   these women married and the resultant population explosion gave rise to the success of the colony. Between their arrival in Quebec and their marriages, les Filles du roi were placed under the protection of nuns, widows or families. There they received board and lodging.

Claude Blandina was my 11th great grandmother! I think it’s fascinating to find out she was a “fille du roi”...as I am a French teacher in NY!