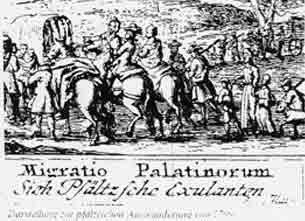 The Palatinate or German Pfalz was subject to invasion by the armies of Britain, France, and Germany. As well as the devastating effects of war, the Palatines were subjected to the winter of 1708 and 1709, the harshest in 100 years.

The scene was set for a mass migration. At the invitation of Queen Anne in the spring of 1709, about 7 000 harassed Palatines sailed down the Rhine to Rotterdam. From there, about 3000 were dispatched to America, either directly or via England, under the auspices of William Penn. The remaining 4 000 were sent via England to Ireland to strengthen the protestant interest.

In 1710, three large groups of Palatines sailed from London. The first went to Ireland, the second to Carolina and the third to New York with the new Governor, Robert Hunter. There were 3 000 Palatines on 10 ships that sailed for New York and approximately 470 died on the voyage or shortly after their arrival.

Over the next 100 years, impoverished Palatines fled from Germany to America - many arriving in Pennsylvania. Olive Tree Genealogy has a Pennsylvania German Pioneers Project which includes the list of ships carrying Palatines from Germany to Philadelphia from 1727 to 1808 as well as names of passengers, Oaths of Allegiance and Ships Passenger Lists.

I have many Palatine ancestors who came to New York in 1709 and 1710. If you are looking for your Palatine immigrants, here are some links that may be helpful

* The Palatine Families of New York: A Study of the German Immigrants Who Arrived in Colonial New York in 1710 by Henry Z. Jones, Jr.

* More Palatine Families : Some Immigrants to the Middle Colonies 1717-1776 and Their European Origins Plus New Discoveries on German Families Who arriv by Henry Z. Jones, Jr.

Here are my Palatine ancestral families:

Lorine - you wrote, "The Palatinate or German Pfalz was subject to invasion by the armies of Britain, France, and Germany. As well as the devastating effects of war, the Palatines were subjected to the winter of 1708 and 1709, the harshest in 100 years." My mother-in-law's book on her Neher ancestors says that they were a happy and contented people. We could not get her to admit that such people did not travel in small boats across an ocean.
What part of New York did your ancestors go to in New York; the west bank, southern Dutchess County or northern Dutchess County/Columbia County?