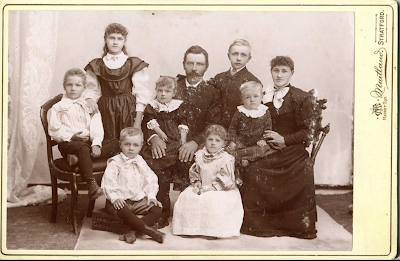 A question was asked on a Facebook group about this photo. Audrey M. asked the group "Does anyone know how I could try to find the date of this photograph?"

I thought I would answer here on Olive Tree Genealogy blog.


To date photographs, first detemine the type. This is a cabinet card which were not used until ca 1870.

Next determine when the photographer was in business. Narrow the years this way. A check online for the Maitland Photography studio in Stratford, Ontario Canada reveals that the owner, George Maitland, did not establish his photography business in that town until 1876. His first studio was on Market Street and that is where this photograph was taken. George was in business for about 30 years (perhaps a little longer) so we can estimate this cabinet card photo was taken between 1876 and 1906 or slightly later.

Searches of available Stratford City Directories reveals that in 1888 George Maitland's studio was still on Market Street but in 1896, Maitland Photgraphy Studios was on Downie Street. Thus we have narrowed the year of the cabinet card even more.

Next we start looking at clothing and hairstyle clues. The adult woman's hairstyle is ca late 1880s to early 1900s but it could be narrowed down even more. Using the reference book "Out-of-Style:A Modern Perspective of How, Why and When Vintage Fashions Evolved" by Betty Kreisel Shubert
I see that her hair with its flattened "spit curls" was in style 1880-1890s.

Her dress with its tight fitted bodice looks like ca late 1880s to early 1900s as well.The children's clothing is confusing me slightly as the boys with their knickers look to be in the early 1900-1906 range. But the girls are wearing the yoke-style dresses framed with ruffles which was popular in the 1890s.  The 1890s also saw huge balloon style sleeves. I'm leaning towards dating this photograph in the late 1890s.

Here is a place to start reading up on some basic clues http://www.lostfaces.com/photo-clues.html
at May 08, 2019

Thank you for that concise wonderful way to date a photograph. I’ll check out the other link you added too.

If you know when any of the children where born and guestamate there age in the picture you could narrow it down some more.