Almost a Dozen Boxes of Life, Where do I Begin?

Yesterday I looked at the 11 large cardboard boxes and 2 huge plastic tubs containing my mother's life. As I mentioned in my posts Packing Up a Life, the boxes contain an assortment of items from her apartment. Mother was not an organized person and her living areas reflected that.

So each box contains eclectic items that were packed as I found them - a trip diary, old photos, earrings she had taken off and laid down on top of a pile of papers. One room may have held 3 trip diaries, others were scattered in one of two bedrooms, some were in drawers. This makes for difficult unpacking as I don't know what is in each box. We had very little time and could not sort before packing, it all has to be done now that the boxes are here ready to unpack.

As I stood and gazed at the boxes sitting on top of each other in my computer room, I wondered how on earth I should tackle this huge job. "Start with one box" said my husband. His idea was that I would unpack one box, sort it, organize it, archive it and scan or copy any papers to share with my siblings. Then all the items in that box would be stored in their proper place. But where WAS their proper place?

And how could I unpack one box and go through it carefully when it might contain one trip diary but none of the others. Shouldn't I unpack everything and organize items in some kind of chronological order? And did I really want 10 boxes sitting for weeks while I took my time with one?

Finally I decided I had to unpack one box and organize the items within by putting them in plastic storage tubs. I knew I would find my mother's writings, her memoirs, her trip diaries, photographs and her genealogy papers. So I would need (at a minimum) one tub for photos, one for memoirs and souvenirs relating to her life, one for her trip diaries and one huge tub for her genealogy papers.

I decided I could not allow myself to enjoy what was inside each box, but instead unpack, sort, organize into tubs until all boxes were empty. When all the boxes were unpacked I would allow myself to take one tub at a time and go slowly through it. 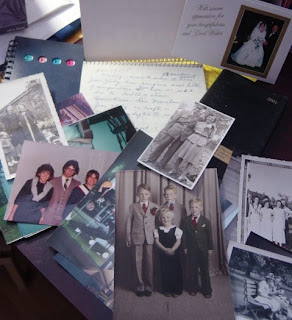 Easier said than done! The first box had many surprises and treasures. Besides the dust there was a very nice photo of my grandmother on her wedding day to her second of three husbands, several other photos I had never seen before taken in the 1920s in Guelph Ontario, her writings about her trips to Australia, Alaska and Russia, two published articles about mother, my aunt and my grandmother living and travelling around N. America in a Winnebago in the 1970s, a book of minutes of meetings where she was secretary, an envelope of newspaper clippings of births, deaths and marriages from the early 1900s, a 1967 Expo Souvenir Glass, and my step-father's death certificate.

How could I not sit down with a cup of tea and enjoy reading her trip diaries at the very least!

I confess that I gave in. I read her trip diaries. I glanced at the photos but fought the impulse to scan them and put them up in a Picassa Web Album or print them off for siblings. I spent a wonderful afternoon curled up in a chair, feeling like my mother was sitting in my living room telling me all about her adventures.

Now I have to go back to unpacking, sorting and organizing. I welcome any suggestions as to the best method of tackling the unpacking and sorting, but also how to archive and share the treasures with my siblings and other family members!
at January 31, 2009

You should enjoy these treasures as you unpack and organize them! It may take longer to get the job done but you have everything at home now so what's the hurry? For now don't worry about scanning. Once you have everything sorted and have a good idea of what all you have you can decided if you want to pick one project to work on or perhaps diaries one week and photos the next.

I have been following your Packing Up a Life saga with interest and sympathy; I had to do much the same thing years ago when my mother died. My husband and I had only four days to do it, and we could only take as many things as the two of us could carry in our luggage on the airplane. I agree with your plastic storage box approach and with Apple's idea that you should enjoy looking at what is in the boxes. If you have a sizable enough room in your house that could be devoted to this for a few weeks you could probably get everything organized to your satisfaction and then start scanning them.

Lorine, I appreciate the detail with which you're relating all this to us. I'm going to be where you are some day and I'll welcome the "plan of attack". I agree with the above comments of Apple and Greta---sort, organize, enjoy, remember, sort, remember, etc. The scanning and siblings can wait just awhile. This is a big task. You have the right idea---sort by type of item, then when it's all together, you can pick a "tub" to scan, label, put in binders, file and send on to others. You've done a tremendous job so far! I'll be following your progress and wish you the best!

I think you have a good plan, to first work on sorting into categories items from all the boxes. Then you can work on each category in it's turn. At least that is how I would tackle it.

I can see how lucky I was when my mother passed away. She was preparing for a move to Utah when she suffered a heart attack and died. She had gone through all her items before hand so we had very little to do. I received all the boxes of genealogy but they were at least in some type of order.

When I went through her items I sorted as quickly as I could until the spirit moved me to stop and examine items in more detail. During those times I felt my mother's spirit around me. It was like a big hug. I cherish the memories.

First of all, I would like to present my condolences. We lost our Mom two years ago.
For the sorting, she had been down-sizing for several years, thinking about moving to a smaller house… And we moved her to “vacation” with my sister in California before we had to face emptying the house.

I was lucky too that she had done so much to preserve genealogical souvenirs/photos… writing down names when she knew them and so on. I only regret that her ‘autobiography’ written at the age of 80, was only one and a half pages long, whereas she had so much more to tell. You are lucky to have all those binders and folders.

While of course you have to work on unpacking, the important thing to keep in mind is to relive the warm memories these artifacts can make surface. I like your husband’s suggestion – one step at a time.

You wrote a few days ago “a life lived, now gone”. No, I beg to disagree. You all are giving your Mom’s life a new life. A continuum. Keep up the good work. And keep her in your hearts.

We'll be keeping you in ours.