I had a bit of fun searching South Carolina Death Records 1821-1955 and discovered that there are many deaths that occured in other locations in the USA, Canada and even Germany. The bodies were brought back to South Carolina for burial and thus ended up in the S. Carolina Death records database. 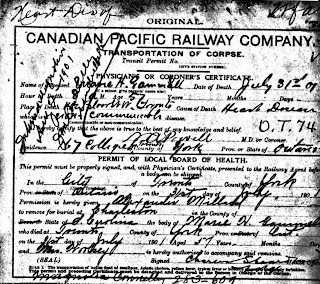 For example, Marie H Gamwell age 57 died in Toronto Ontario Canada in 1901 and her body was sent via Canadian Pacific Railway to Charleston South Carolina. Her cause of death, name of person being given permission to ship the body etc are given on the image.

These records are brought to us by Ancestry.com and Information generally listed in these records includes: name of deceased, death date, death place, age at time of death, gender, race or color, and death certificate number.