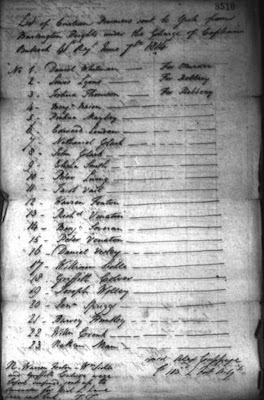 As I've been researching in the Upper Canada Sundries, I've come across many different lists of names. It seems to me that these lists work in several ways - as substitute census records for early Ontario (Upper Canada), as military lists and as in the case below, as lists of prisoners in various jails.

The images are not always easy to read, the filming is often out of focus but I've done my best to transcribe these lists. If you recognize an ancestor and I've erred in transcribing the name, please leave a comment on this blog entry.

I will eventually be publishing all the transcribed lists on my website Olive Tree Genealogy under the Ontario section. Here is the first of my transcriptions:

Note at bottom left of list: N. Warren Fenton, William Sickle and Griffith Colver were before confined, sent up to Ancaster for [next 6 words difficult to read] (signed) T. T.

Footnote 1: I also found this reference at http://archive.org/stream/jstor-1134290/1134290_djvu.txt to Lewis Lyons and what interests me is the connection to my Ontario Peer family. Lewis' mother was Marcia Peer sister of my ancestor Levi Peer:

Hi Lorine, I think no. 11 is Jacob Vail; no. 14 is Benjamin Soveran; agree with the rest of your question marks (too bad the focus is not great, eh?). This is good of you to post lists from the Sundries!

Brenda - thanks for the update/corrections!

The Upper Canada Sundries are so frustrating. I have found many lists of names and especially some for women and children of families pre 1814 - but - the focus is so blurry that most are impossible to read!

I'm still going to put them online with my best interpretation. Perhaps someone will recognize a name.