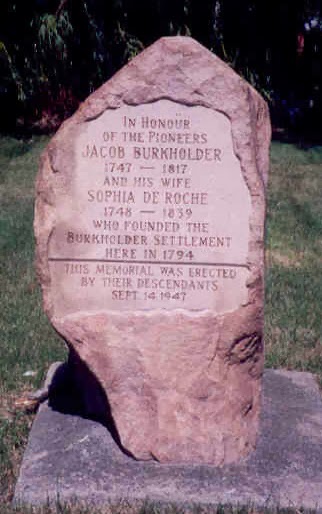 Amy Johnson Crow has a new challenge for geneabloggers called Challenge: 52 Ancestors in 52 Weeks. Amy challenges genealogists to write about one ancestor once a week. I'm having fun with this and I hope you are too!

Jacob Burkholder, my 5th great-grandfather, was born in Switzerland in 1747, but his father moved the family north to Mannheim, Germany on the lower Rhine River to escape persecution. Here, they joined other Palatines and Jacob learned weaving.

Jacob and his two brothers John and Christian sailed for America in 1765 on the ship Myrtilla. They landed at Philadelphia, 21 September 1765.

Several French Huguenot refugees were among the Myrtilla's 81 passengers, including Abraham and Sophia De Roche. Sophia was a French girl, supposedly of Huguenot descent. Jacob married Sophia De Roche in 1765 in Lancaster Co., Pennsylvania. Their signatures may be seen in Pennsylvania, where they took the oath of allegiance to the British Crown in 1765.

Following the American Revolution, Jacob Burkholder wished to remain under British rule. After his eldest sons made an exploratory trip to the head of Lake Ontario, Jacob, Sophia and family left Pennsylvania for Upper Canada (now the province of Ontario). With their son Christian as their guide, they came by Conestoga wagon drawn by oxen, crossing at Buffalo and arriving at Niagara in present day Ontario province, in October 1794. They obtained 800 acres on the Hamilton mountain and were the first family to settle east of the Caledonia highway.

A family cemetery was established by 1800, the earliest interment being Jacob Burkholder's son Joseph, who died of a broken back after falling from a shed roof. This cemetery is said to be haunted with a spectral light that appears every time someone nearby dies. No one has ever figured out what the light is or why it appears every so often on top of the church.

The family gave its name to a small community, the Burkholder settlement, which developed at the intersection of what is now Mohawk Road and Sherman Avenue in Hamilton, Ontario.

In 1839, a small log building was erected to serve as both church and school. It was replaced by the Mountain Chapel in 1850. This was renamed Burkholder Methodist Church in 1886 and after 1925, became known as Burkholder United Church.  In 1947 a monument was erected to honour Jacob and his wife Sophia.

I have found Jacob recorded under many spellings, including Borghonder. My Burkholder name daughters out with Jacob's granddaughter Elizabeth (born ca 1816 in Hamilton to David Burkholder and Elizabeth Gingrich) who married Richard Vollick. It is kind of interesting to note that Elizabeth was one of 16 children and that 4 of the Burkholder siblings married Vollick siblings.

My 3rd great grandmother was Elisabeth Burkholder Wolf b 1814 PA. Her father was Abraham. I have little other information on the Burkholders. Wonder if we connect up.
Colleen

That is very possible Colleen. I have not searched the family in many years but when I first began on my Burkholder line (20 plus years ago) I recall there was more than one brother settling in PA.

Wow.What a wonderful story you have shared. My beloved grandparents are Burkholders but I dont know much about my family history that far back. Thanks so much.

Thanks for the article - I am a Burkholder living in Kitchener and am taking trip down to Hamilton to visit some of these sites. I have a genealogy chart that goes back to Jacob Burkholder fro
m Switzerland on my fathers side and to James McGregor from Scotland on my grandmothers side. Very interesting. Nathan Hale and Rob Roy McGregor are notables.

Why do you call it the Haunted Family Cemetery? Just curious.I have to do a bit more digging in my research as Matilda is one of my grandmothers, daughter of Enoch & Susan. We are coming to Ontario the end of this month from Northwest Alberta to do family research and will definitely be stopping here to check the cemetery out. My great grandma and 5 of her children came from Mar, Bruce County to Alberta in 1915. Her husband Thomas Blair Armstrong had passed away in 1914 and she heard about the Peace River Country and came here. Her name was Susan Maria (Whitman)Armstrong. Thanks for this post. Grace (Staggs) Wideman. It's interesting as my husband's family settled in Markham from Pennsylvania and there is a church there called Wideman Mennonite Church, which we will be visiting too.

Thank you for this information. My 3rd great-grandmother was Barbara Burkholder who married Peter Thomas. According to what I have seen on the Internet her father was Jacob Burkholder Sr. My grandmother's mother was Martha Thomas the daughter of David Thomas one of Barbara's sons.

Unknown - yes Barbara is the d/o Jacob and Sophia. However you should be cautious at trusting everything you find online! Look for records to verify what you find. If there are sources given, that's great but no sources means the "facts" could be wrong.

Lorine, Thank you for your fast feedback. Of course one cannot trust or believe everything published on the Internet especially if there are no documents. The year of birth I have seen ON THE INTERNET (excluding Ancestry -where it is not available) for Barbara is 1776. I am not sure this is correct because I have her in a 1871 census for Toronto Township, Peel County and the age recorded is 85 years - this makes her birth year 1784. The second thing which I find puzzling is the photo of Jacob and Sophia de Roche posted on Find-a-Grave. Jacob passed away in the year 1817 according to the memorial - there were no photographs of humans or anything for that matter before 1817. Perhaps it is not a photo but a drawing, it looks very lifelike. Perhaps it is me who doesn't have the right Burkholder. I have their names on their daughter's (Susannah Thomas) marriage certificate : Peter and Barbara. I have the right Thomas family because they married a Wilson - my grandmother's maiden name and the Wilsons and Thomas' lived in close proximity - back then 1800s people often married their neighbours.

I just found this : Barbara BURKHOLDER [Parents] was born in 1776 in Lancaster County, Pennsylvania, USA. She died before 1881. She married Peter THOMAS about 1805.

Anyway, I think I will revise my research.

You are correct that the photo (I have seen it online too) is NOT of Jacob and Sophia. A Google search by the person(s) who have shared it would have shown them that photography was not invented until 1839. See http://www.lostfaces.com/daguerreotypes.html

I must caution you that Annals of the Forty is full of errors. It was a compilation done many years ago consisting of submissions by ordinary people like you and me. It is good for clues - take what is said and look for sources to prove or disprove. But it should not be considered a reliable source. Each bio is only as good and as accurate as whoever researched it, and we do not know their qualifications as no sources are provided.

With regards to Annals of the Forty - back then the research would have been compiled by hand from microfilm or provided as heresay as the Internet was not what it is today. My Barbara Thomas has German ethnicity as per the 1871 census of Peel County. I have never been able to find a death registration for any Peter Thomas or Barbara Burkholder. This often gives clues as to the parents -- but not always. My family tree is on Ancestry.ca - I am at least certain of my grandmother's grandfather David Thomas - it is recorded on Martha Thomas' death certificate - Martha being my grandmother's mother. They were all found in early days near Port Credit in Peel County and I know that for a fact. I just cannot be certain of any Barbara Burkholder as per Susannah's marriage registration since Barbara's surname recorded thereunto is her married surname Thomas. Both Peter and Barbara in my research are of German origin according to a few sources (documents). I have a lot of documents but I am missing birth and death certificates for several people. I still believe that the Barbara Thomas in the census is related to Jacob Burkholder. Oftentimes people would name their children after their relatives and I have seen another Susanna amongst several other Burkholder relatives of an earlier period. My Barbara had 3 children to my knowledge: Daniel, David and Susannah not the eleven stated in the snippet from Annals of The Forty I posted earlier.

Thaank you for your feedback. I will continue my research to prove that my Barbara's parents are Jacob Burkholder and Sopie de Roche.

One last item - this was just discovered on Ancestry.ca : the death certificate for Susannah Thomas - Barbara Thomas' daughter. The certificate records the parents as Peter Thomas and Barbara Burkholder. The death took place in Toronto Township, Peel County in 1912. The Peter Thomas and Barbara Burkholder in the Annals were said to have lived in the Niagara area and had 11 children. I don't think it likely there were 2 couples with identical names.