But I KNOW My Great Grandma's Name! So Why Am I Stuck? 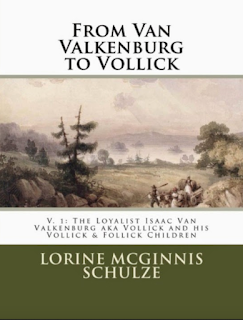 Many of us know our great grandparents' names. One of my great grandmothers was a Vollick. I knew that, and I had proof (baptism, marriage, census records)which I had found over 30 years ago.


As I traced her lineage back, I found the trail stopped cold at *her* great grandfather, Isaac Vollick the Loyalist. I could not find him in New York before he arrived in the Niagara area of Ontario with Butler's Rangers. I hunted in every resource I knew of, to no avail. There simply were NO Vollicks running around south of the border in pre-Revolutionary times!

And then I stumbled on a very generous lady who steered me in the right direction with a casual remark "Did you know that your Loyalist ancestor Isaac Vollick used to be called Isaac Van Valkenburg?"

Huh? How the heck did one go from being a Van Valkenburg to a Vollick??!!! But she was absolutely correct in her statement. The reason I could not find any Vollicks running around south of the border was because it was not a "real" surname! My Loyalist ancestor simply adopted it. I think he adopted it as a nickname "Valk" (Dutch for falcon) from Van Valkenburg (meaning town of the falcon in Dutch) which may be what his comrades in arms called him. And it stuck. It became an established surname and there are thousands and thousands of Vollick descendants running around in America and Canada today.

There are also Follick descendants - because some of Isaac's sons and grandsons became known as Follick and that surname also stuck. I believe this alteration was due to the German/Dutch sounding "f" for "v". So instead of hearing Vollick, an English speaking/writing clerk no doubt heard Follick. And thus another surname was born!

As a side-note, since my discovery 30 years ago that my Vollick ancestor was really a Van Valkenburg I have researched the family in detail and have now published three books on Isaac Van Valkenburg aka Vollick, the Loyaist, and his two sons Cornelius and Storm.

The above books are available at New Netherland Books

Another example is my French LeRoy ancestor (prounced sort of like Le Wah in French - it's difficult to render it in text) settled in what is now Quebec in the mid 1600s. When he moved to New York, his name started being recorded as Larua, then Larraway. No doubt English speaking clerks mis-heard his name when he pronounced it! And so it began to be recorded as Larroway.

You must have an open mind when researching ancestors. You don't know if they changed their names. It may have changed due to mis-recording based on language differences. Did they change it to escape a bad situation? Did they change it simply due to having an established nickname that took hold? Whatever the reasons, if you are truly stuck on an ancestor, think about possible name changes. You may need to develop an entirely new area of thinking and researching!

Where I live in eastern Ontario, Le Roy is pronounced "Lee Roy".

Wonderful! That generous lady saved the day. I never would have linked those two names.

Or I could have used an incorrect transcription, never found any records to confirm or deny and looked for a nice Scottish family named Frasier for years. Finally found a cousin who knew the last name was Fryrear, probably Farrer. Can't find them either but at least I have a correct name.

Very interesting! Just this week, I've been working with one of my families and trying to determine if they actually changed their last name or records were just written wrong. It might be a long process! Thanks for the reminder to keep an open mind!