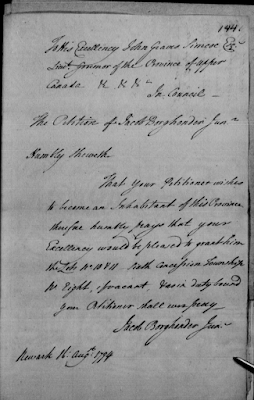 Jacob and Sophia Burkholder, my 5th great-grandparents, were the first settlers in Hamilton Ontario Canada on land called the Burkholder Settlement. Jacob's land petition shows he arrived in Upper Canada July 1794 and applied for land 7 Aug. 1794. On this petition his name is recorded as Borghonder.

The Burkholder family came from the Ementhal valley outside Berne, Switzerland. Mennonites were opposed to war and many were imprisoned, exiled or burned at the stake. 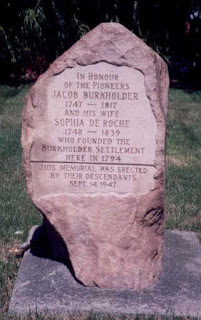 Several French Huguenot refugees were among the Myrtilla's 81 passengers, including Abraham and Sophia De Roche. Sophia was a French girl, supposedly of Huguenot descent. Jacob married Sophia De Roche in 1765 in Lancaster Co., Pennsylvania. Their signatures may be seen in Pennsylvania, where they took the oath of allegiance to the British Crown in 1765.


Following the American Revolution, Jacob Burkholder with wife Sophia and their adult family left Pennsylvania for Upper Canada (now the province of Ontario). With their son Christian as their guide, they came by Conestoga wagon drawn by oxen, crossing at Buffalo and arriving at Niagara in present day Ontario

You can read more about the Burkholder family and origins at The Burkholder Family of Switzerland
at July 23, 2016

Hi, my name is Kim, and I am also a descendant from Jacob and Sophia. They are my 7th great grandparents. Thank you very much for posting this, I was able to connect a lot of dots in my family history.

Hi, my name is David and I am also one of the thousands of descendants of Jacob and Sophia. I am a descendant of their youngest son Peter who was my 4th great grandfather. Peter's daughter Susannah married a laborer, my great great grandfather, who worked, I presume, on one of the Burkholder farms. The rest is history.